Welcome to the 23rd issue of the Broker’s Beat. This week, we celebrate more all-time highs (this is a pattern now), talk about the Bitcoin (and now Ethereum) shortage, and discuss the new shift to mining in Sweden and Norway.

“One of the top trends of 2020 in the blockchain space was the explosive growth of traditional financial products being reimagined for cryptocurrencies. Although there are numerous projects taking different approaches to collateralized lending and borrowing with digital assets, the risk is high and many have gone bankrupt or failed to gain much adoption. This leaves the door open to established and well-connected companies in the industry to enter and quickly take significant market share.”

“Even though leading bitcoin mining manufacturer Bitmain doubled prices to capitalize on overwhelming demand resulting from the surge in the price of bitcoin, it still pre-sold three months of inventory in a few weeks. In early December, Bitmain was pre-selling bitcoin ASIC miners with an expected shipping date of May 2021, per CoinDesk’s prior reporting. Less than a month later, Bitmain has sold out through August 2021 and has raised its prices significantly.”

“According to a report by Bloomberg, cryptocurrency mining companies in China are leaving the country due to high electricity costs and regulatory concerns. Miners are planning to shift to the Nordic region due to a plunge in electricity prices.”

“A Canadian publicly listed bitcoin mining operation, has entered into subscription agreements with certain institutional investors for gross proceeds of approximately CAD$20.0 million in a private placement in the United States of its equity securities, comprised of 8,888,889 common shares along with warrants to purchase an aggregate of up to 8,888,889 common shares at a purchase price of CAD$2.25 per common share and associated warrant. The private placement is expected to close on or about January 6, 2021, subject to satisfaction of customary closing conditions.”

“Merchant bank GDA Capital, part of the GDA Group, and serial entrepreneur Scott Melker, known as The Wolf of All Streets, have announced a co-investment in the blockchain-based platform Elitium, to accelerate the buildout of their wealth management tools and global adoption of the native EUM digital asset. GDA Capital has already established a strategic alliance with Elitium and helped increase awareness of its native cryptocurrency EUM and add to the funnel of high value asset offerings to take place in the new year.”

Note: This column was written before the ATH of above $39k we are at today.

The price of Bitcoin has continued increasing and came up by 18.71% from Monday’s low at $30,114 to $35,785 at its highest point yesterday. At the time of writing, it is being traded slightly lower at around $34,650 but is still in an upward trajectory overall.

On the hourly chart, you can see that the price made a higher high than the one on Sunday when the price reached $34,560 at its peak. This could indicate that the price is developing another five-wave impulse to the upside of a lower degree count, with Monday’s low being the end of a local correction.

We have seen a drop from Sunday in an impulsive manner which strongly pushed the price to the downside even spiking to the $28,000 area. But as the price snapped back above the $30,000 mark quickly and now made a high this appeared to be only a short-term pullback.

Another possibility could be that the 5th wave out of the last impulse ended on Sunday with the currently made higher high being the corrective B wave from the now developing higher degree ABC correction. In that case, the increase would end shortly and would propel the price further to the downside, potentially below the previous spike at $28,000.

Almost every week we comment on geographical trends as they pertain to mining. One of the most common criticisms of Bitcoin is the concentration of mining power in China.

The last few months saw several Middle Eastern countries start to allow or even encourage mining domestically. North American miners started to pick up steam in Q4 as well, thanks to some novel deals that were set up in more remote areas.

But now we’re seeing something new. Norway and Sweden are starting to attract miners from China who are worried about regulatory issues and want to move somewhere more stable. With electricity prices starting to go up in China due to the switch to fossil-fuelled power in the dry season, miners have been attracted to the Scandanavian landscape for its cheap power.

According to Genesis Mining’s Head of Operations, “there is a very important strategic shift away from mining in China to mining in western countries like Sweden as Bitcoin investors become more public and want more stability and critical safety.”

How this will play out in the future, we do not know, but it highlights that electricity costs may always come first, but miners are politically savvy enough to want to hedge against regulatory issues in the coming years.

This isn’t just a big deal for miners, but for Bitcoin investors on the whole, as it assists their decentralized thesis.

Total estimated number of terahashes per second has continued increasing and is on the rise since the 28th of December when it was sitting at 130.995M. Now as it reached 148.067M it has made a higher high compared to the Novembers’ one when it came to 141.076M. 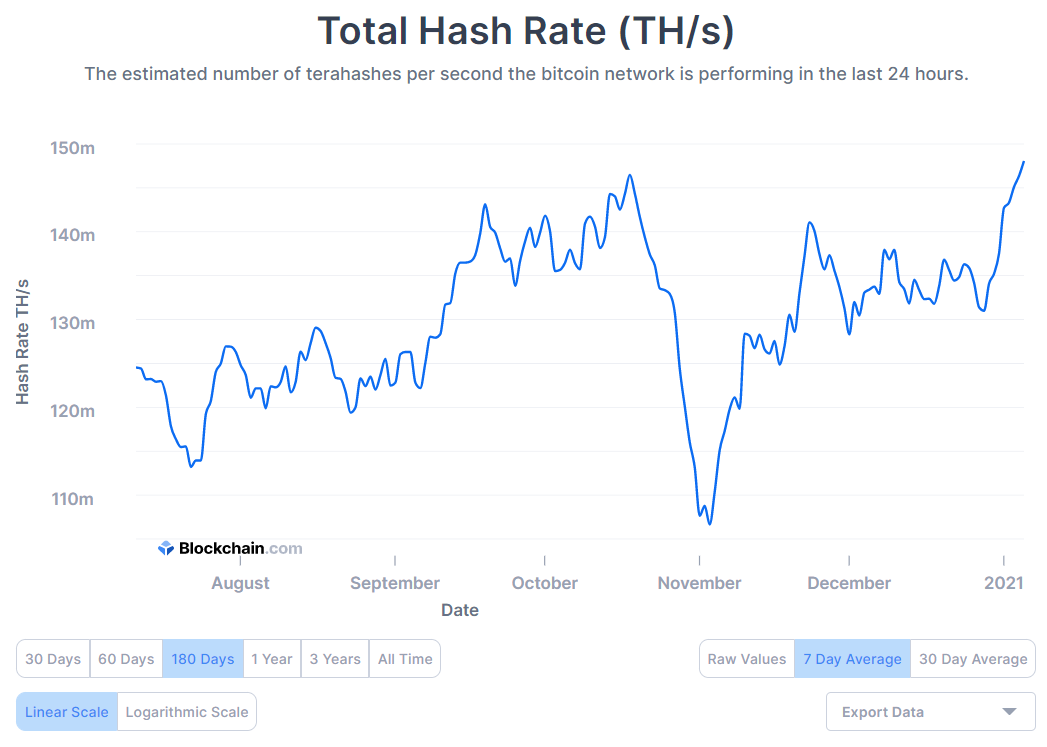 In October we saw the all-time high with the hash rate coming to $146.485M, so now as it managed to surpass that level as well, we are effectively seeing the formation of the new all-time-high.

Considering that the valuation just started to break above its prior all-time-high this is expected to continue in the upcoming period.

Miners have seen the increase in revenue with the rising price of Bitcoin, and especially since the second half of December. From $17.682M which was its December 16th low, the total value of miners revenue rose to $33.15M so far. 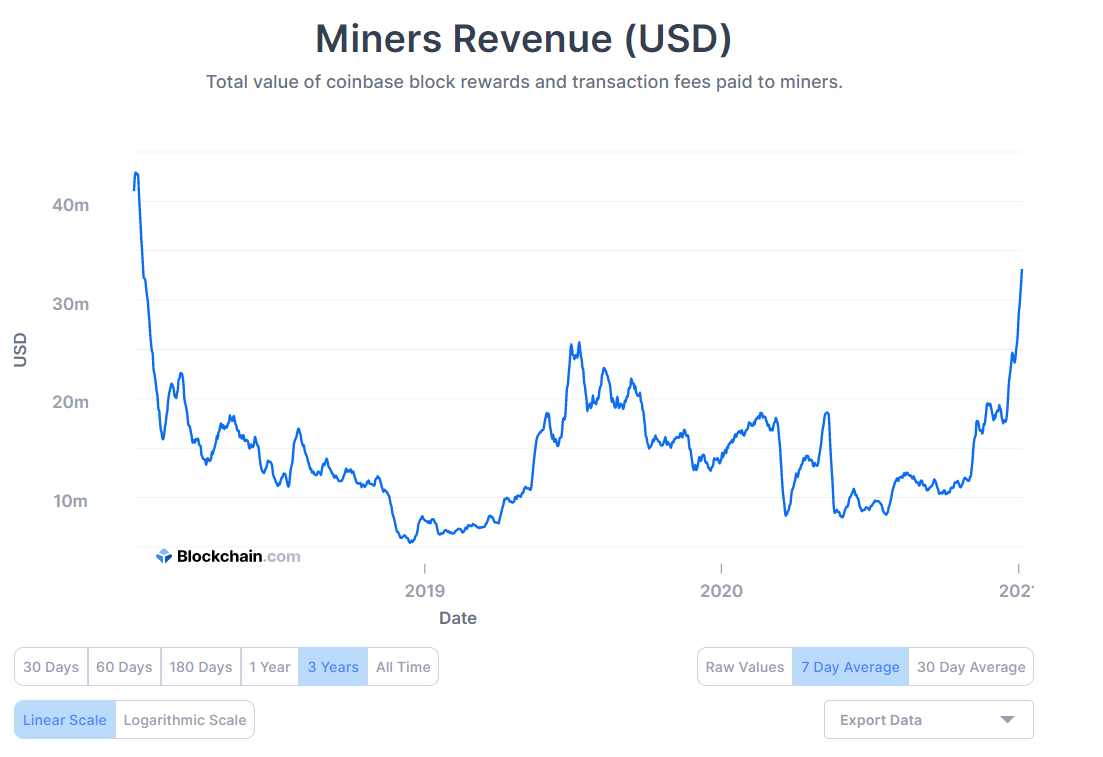 As you can see from the chart above the valuation surpassed the high made last year in June and July when it came up to the 25 area. This is the new record in a while as the miners revenue valuation hasn’t been on these levels since January 2018.

This week’s digest will be shorter and focus on the supply crunch we’re starting to see across the sector.

The bull run we’re in the middle of is gaining steam largely because of the consistent exchange outflows. Reserves at exchanges are continuing to decrease for both BTC and ETH.

Then we have Coinbase hitting an all-time high for their BTC outflow. On January 2nd, BTC outflows peaked, and this all occurred while BTC was above $30k. This suggests that institutions are putting more funds into Bitcoin even at these higher prices.

Finally, stablecoin reserve volumes are hitting new highs, which is another strong signal that more money is entering the ecosystem.

It seems like we’re entering a sell-side liquidity crunch for both ETH and BTC. The ETH crunch was less-expected, but with it hitting all-time highs of its own, this trend will likely continue to play out. Especially with XRP still suffering after the SEC announcement and delistings from major exchanges.

Every week, we release research that covers a wide swath of topics. Already this week, we’ve released what we think is a great report on the investment thesis for Bitcoin.

Tomorrow, we’ll have a report coming out on the Healthcare Industry. However, if you’re only on the Broker’s Beat list, you won’t receive this. To opt-in for reports like this to be sent right to your inbox, subscribe here!

PrevPreviousPlowing Towards More ATHs: Broker’s Beat Volume #22
NextEquities Markets Gone Crazy: Broker’s Beat Volume #26Next
We use cookies on our website to give you the most relevant experience by remembering your preferences and repeat visits. By clicking “Accept All”, you consent to the use of ALL the cookies. However, you may visit "Cookie Settings" to provide a controlled consent.
Cookie SettingsAccept All
Manage consent