Welcome to the 14th issue of the Broker’s Beat. This week, we talk about the upcoming U.S. election and what it will do for crypto, as well as Square’s big BTC purchase and what that could mean.

“Google Trends data works like this: Each search term is assigned a numerical value that provides an indication of its popularity. Taken with a pinch of salt, Google’s data provides a rough indication of the world’s interest in various facets of the cryptocurrency market.”

“The New York-based company said that accredited Investors who purchase shares in the trust can now sell them after a mandatory six-month holding period instead of the previous 12-month lock-in period.”

“DeFi without a doubt has renewed the demand for Ethereum. As more users want to get a piece of the DeFi tokens, the price of each transaction fee has ballooned. Cointelegraph noted that at one point, a standard transaction on Ethereum hit at least $15 on average. The publication said this is good in the short-term, as the miner revenue suggested profits for miners, but it could put off casual users because buying a token on Ethereum became very expensive.”

“The pool is a merge mining operation which means the miners can mine both bitcoin cash (BCH) and hathor (HTR). The Hathor Network website claims the project is a “scalable and easy-to-use blockchain for digital assets.” The community’s quick guide to mining HTR indicates that merged mining can be done with BCH, BSV, and DGB.”

Last week, we went deeper into the gold vs. Bitcoin dynamic, but now we want to zoom out and talk about the fundamental expectations we have for the next few weeks.

We try and avoid politics here, but something that needs to be pointed out is that Bitcoin and U.S. equities do have a positive correlation. So what will happen in the various situations?

Trump has shown an unprecedented willingness to support the prices of equities, and based on the stock performance coming out of the last election, the market would probably go up again. This would lead us to think BTC would go up as well, however, Trump is also vocally anti-Bitcoin. Our guess is that we see a short-term pump in this situation, with long-term problems due to additional regulatory hurdles.

Biden is the safer candidate, and we’re not sure how the market would receive his election. The market might be less volatile in this case, and Bitcoin would suffer as a result. Biden’s position on Bitcoin is less clear, so we’d wait to see what the long-term prognosis was before saying more.

What we’re most curious about is what happens if there is a drawn out election as votes continue to come in. This would be very bearish for the entire U.S. political system and would probably be the most bullish for Bitcoin.

As the chart shows below, Bitcoin is comfortable where it is and nothing is happening right now. We expect relative stability until the election. After that, it’s anyone’s guess. 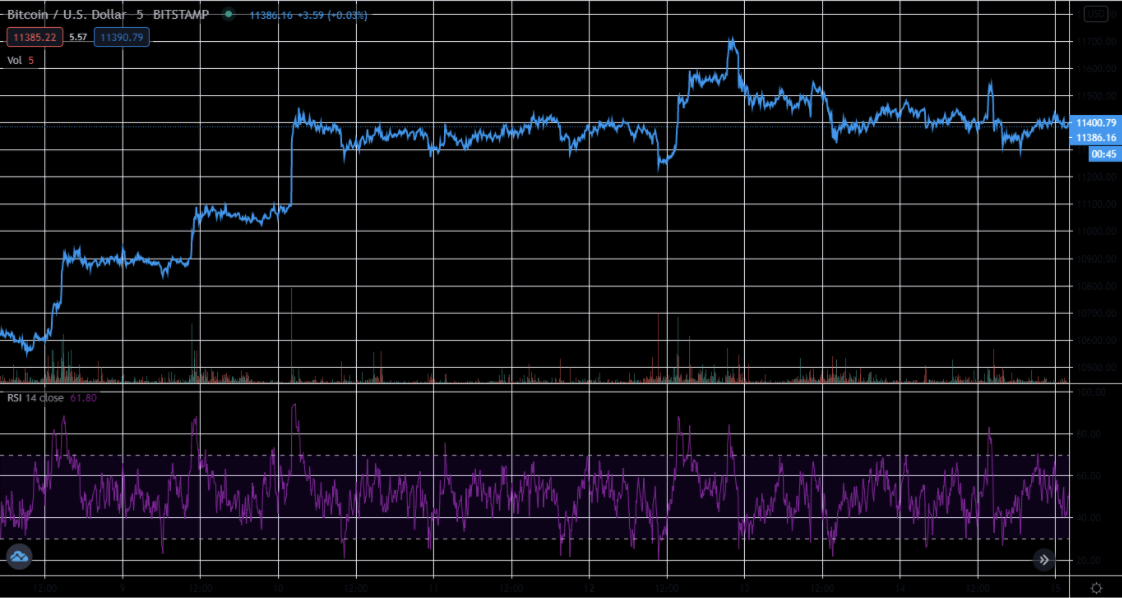 When we talked about Abkhazia last week, we were getting deep into the micro of how the market works. Mining is very difficult to suppress and actually has the potential to help pull countries out of poverty.

Another example of this is what’s going on in China. While we would never claim that mining was contributing significantly to the GDP of China, it is a great way for rural areas to profit from this phenomenon.

So what will happen if the Three Gorges Dam breaks? This is a question everyone has been battling with. As you’ll see in the section below, hash rate and mining difficulty are at all-time highs. If the dam breaks, where will all this go?

Mining in China depends partially on hydroelectric power, which means they’d lose a power source. But it also means that actual facilities could end up getting flooded.

This week, we leave you with a question rather than an answer, which we hope will keep you aware of risk factors affecting Bitcoin.

It’s frankly getting a little repetitive in this column, because we keep hitting new highs in the hash rate. Below, you can see a 2-month chart and how BTC’s hash rate has hit a new high.

We credit part of this to the bullishness that we expect from Square converting $50 million of their cash into BTC. 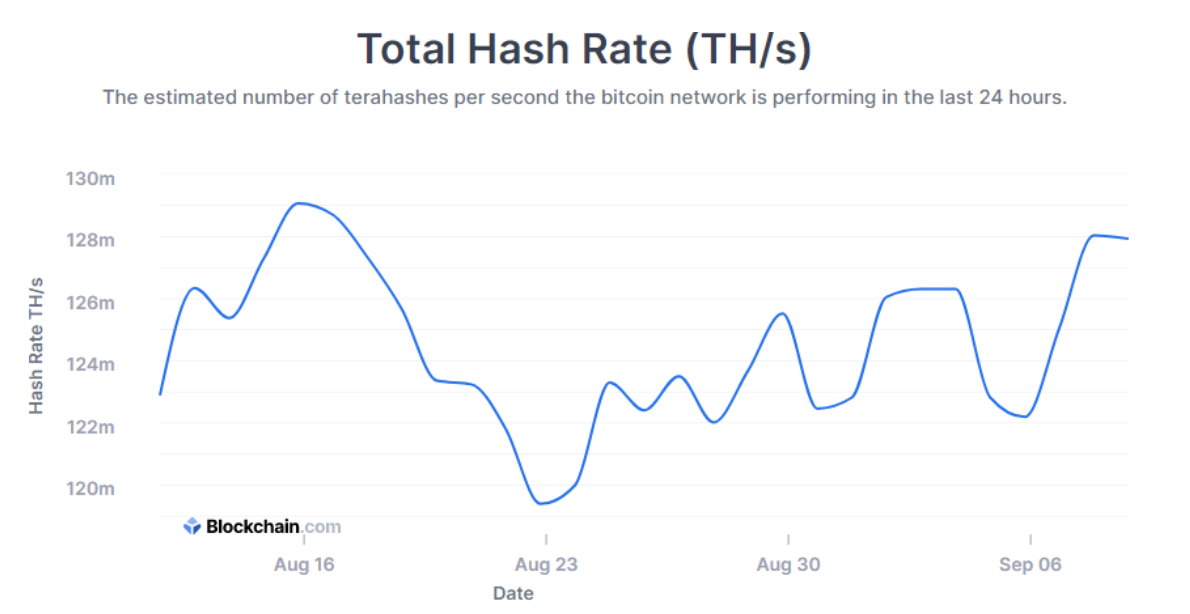 The network difficulty has also reached an all-time high (as shown below). All of this makes for bullish signals for Bitcoin. Mining revenue has stayed about the same, but our expectation is that this is the beginning of something larger. 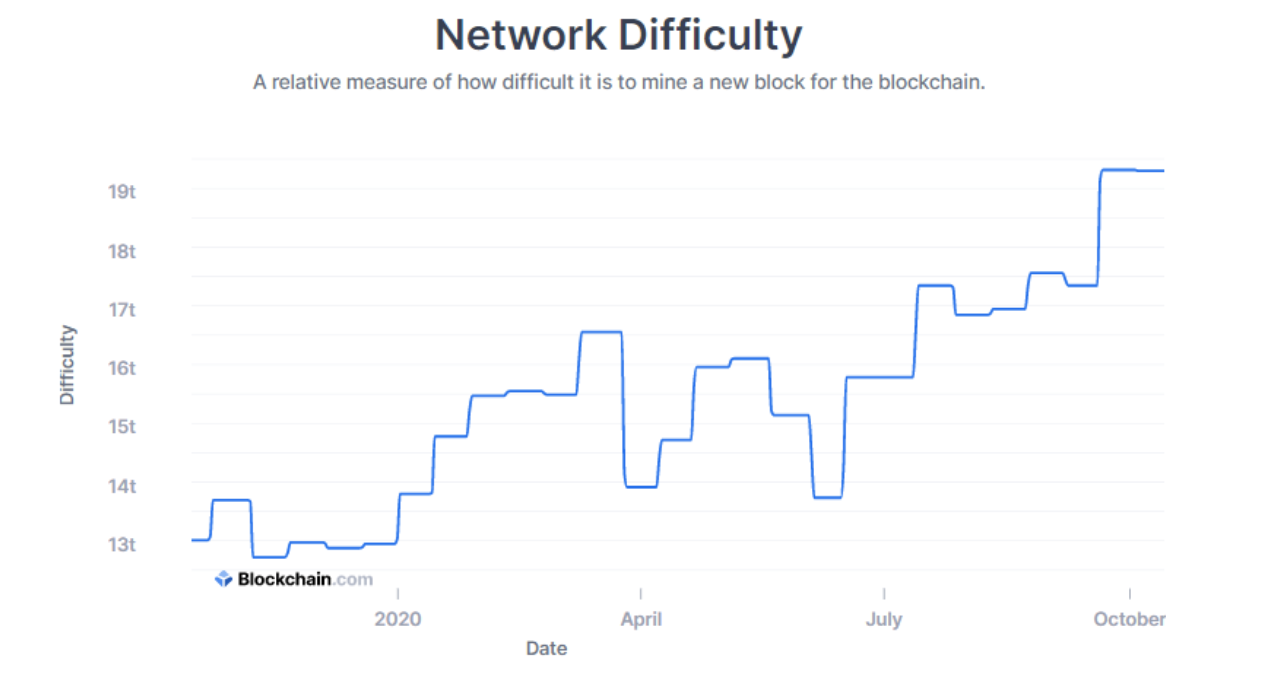 We’re seeing different indicators across the board that make us think the industry is about to go through a change. Big purchases from corporations, all-time highs in hash rate and network difficulty, and then a historic election.

It’s our belief that these all play into a long-term bullish stance for BTC.

The most exciting news of the last few weeks has been institutional adoption of Bitcoin. Square made headlines last week when they purchased $50 million worth of Bitcoin, and the weeks before had MicroStrategy buying a large chunk of it as well.

Tyler Winklevoss has been tweeting about this and its future implications, and it seems like his thesis does hold a lot of merit. This is maybe the best time in a while for companies to get into Bitcoin. There’s a ton of upside present, it is less volatile than normal, and it has traditional finance backing now (Paul Tudor Jones’ investment and the custody solutions being offered now).

We know this isn’t explicitly liquidity-related, but it is relevant all the same. Companies opting in to the idea of converting their cash into Bitcoin will create the largest demand trend we’ve seen since exchanges starting streamlining fiat to crypto ramps. This fits the store of value use case that has been touted since the beginning, and will require robust liquidity solutions to fit companies who may also then be receiving payments in Bitcoin.

Here’s a link to some resources that the CEO of MicroStrategy used as they were considering the move, and if you do need help, we offer treasury management services that may be able to help you.

That concludes this week’s Broker’s Beat, but before you go, we have an exciting event to bring to your attention. Our Global Family Office Summit is coming up on Tuesday. Tickets for the event are free right now and for those interested, the virtual conference will take place at the Crypto Convention Centre in Decentraland. The Global Family Office Summit is the first gathering of private wealth that is accessible by zoom with a virtual conference also taking place.

This is a great opportunity to learn from experts in the space and build your understanding of the market and how it’s changing. You can register here.

PrevPreviousLegalize Mining! What Will This Do: Broker’s Beat Volume #13
NextPayPal is the Next Brick in the Wall: Broker’s Beat Volume #15Next
We use cookies on our website to give you the most relevant experience by remembering your preferences and repeat visits. By clicking “Accept All”, you consent to the use of ALL the cookies. However, you may visit "Cookie Settings" to provide a controlled consent.
Cookie SettingsAccept All
Manage consent