Legalize Mining! What Will This Do: Broker’s Beat Volume #13

Welcome to the 13th issue of the Broker’s Beat. This week, we talk about mining being legalized in areas where it was previously operating as a shadow sector, as well as talking about gold’s performance as it pertains to BTC.

Interest in Bitcoin Soars in Egypt Amid Economic Crisis and Unemployment

“Another bitcoin miner, who is a member of several bitcoin and cryptocurrency communities like Bitcoin Egypt, told the publication that he chose this business after losing his job at a contracting company that downsized, following the coronavirus outbreak. He invested what he saved over the past years into the business. More than half a million Egyptians have lost their jobs as unemployment in the country rose from 7.7% in the first quarter to 9.6% in the second quarter, the news outlet added.”

“‘Bitcoin mining is a 24/7 operation, all year long. They require both cheap AND consistent energy. You’re simply not going to get that from renewable energy sources alone,” he said. In places like Kazakhstan and Iran, which offer cheap fossil fuels, “miners can obtain cheap energy all year round.’ ”

Fidelity, Vanguard, Schwab Funds Have Been Loading Up on Crypto Mining Stocks

“The four firms at the center of the report — Apple, Google, Facebook and Amazon — have been in hot water with Congress for some time. But while the tone of the recent conversation is punitive towards those firms, it also seems to envision a broader shift to new rules that would stop tech from this level of centralization again.”

In our most recent article on the Secure Digital Markets blog, we talked about Chainlink’s rapid rise to fame and what we expect to happen to LINK in the coming months. There are lots of themes and ideas to pick out here!

Today, we’re going to have some fun and look at how Bitcoin performed compared to gold in the last day. We all know the hypothesis about how they should generally move in tandem, but yesterday shows a pretty good sample of how this works.

You can see that in 24 hours, gold was down 0.37% and Bitcoin was down 0.98%. These are insignificant numbers that don’t show much, but you can see a similar drop at the beginning of the chart and then the same spike at the end.

Gold and BTC may not be perfectly – or even strongly – correlated, but there are tons of similarities to watch for here. The last 2 months have seen the correlation between these two assets hit highs of even 70%, and we expect to see them latch onto each other more in the next few weeks. 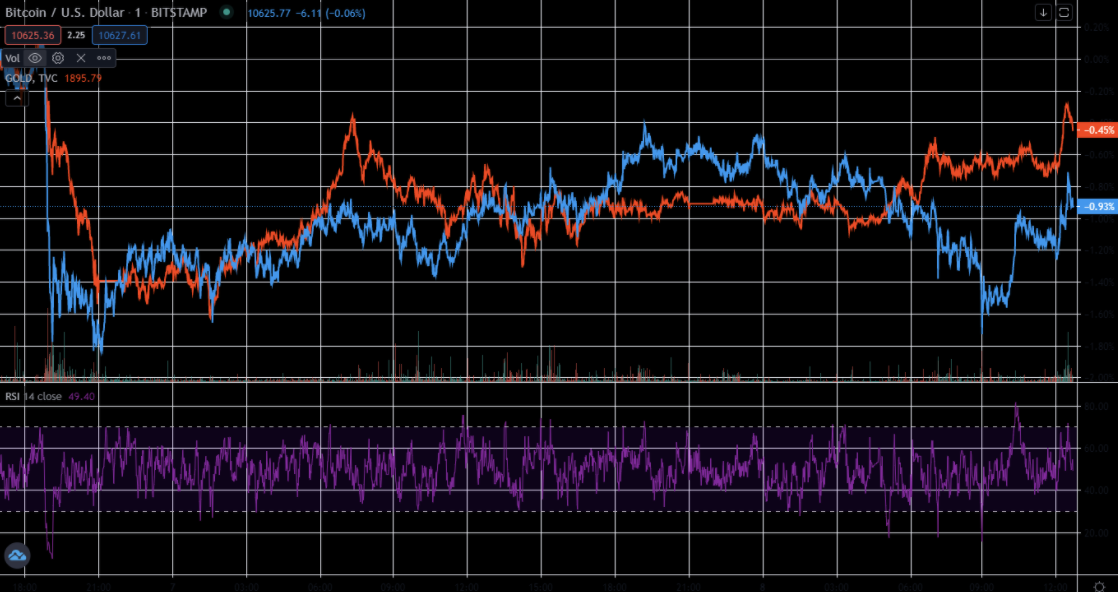 It isn’t that they are similar and is more about investors perceiving them as similar. People aren’t exiting the system, they’re looking for a hedge in these times of stress on the system. Our guess is that the correlation continues to increase through the election. After that, it’s anyone’s guess.

Another deviation from our previously planned programming, but we’re seeing a trend in the legality of mining occurring that we think bears investigating.

Abkhazia, a country you may have heard in the news recently, has ruled to legalize cryptocurrency mining. The rationale behind this is largely because after they outlawed it, it became harder to track and control, and they believe it will be easier to control when it’s in the public eye.

The tumultuous country had been put through an energy crisis when mining was first banned in 2018, and their efforts to stop the practice entirely have been in vain. Granted, they still allow the importation of mining equipment and reported $600,000 of mining equipment was imported in the first 6 months of this year.

As we see more shadow mining industries get legalized in order to tax and control the industries better, the distribution of mining power will change. Places with cheap power who get on this first will profit, hopefully even reducing some of the income equality.

A recent survey done by Cambridge’s Bitcoin Electricity Consumption Index shows that renewable energy comprises only 39% of the total energy consumption from worldwide mining operations. Why is this?

To understand this trend within crypto, it’s important to first comprehend what’s going on in China. The Asia-Pacific region is responsible for 77% of Bitcoin’s hashpower and many of these miners rely equally on coal and hydroelectricity. This is the case because the dry season in China has very little hydroelectric power and miners are running a 24/7 operation that cannot be interrupted.

According to CoinDesk, monthly miner revenue in September was down about 11% from August. The below 60-day chart shows a downward trend in miner revenue. 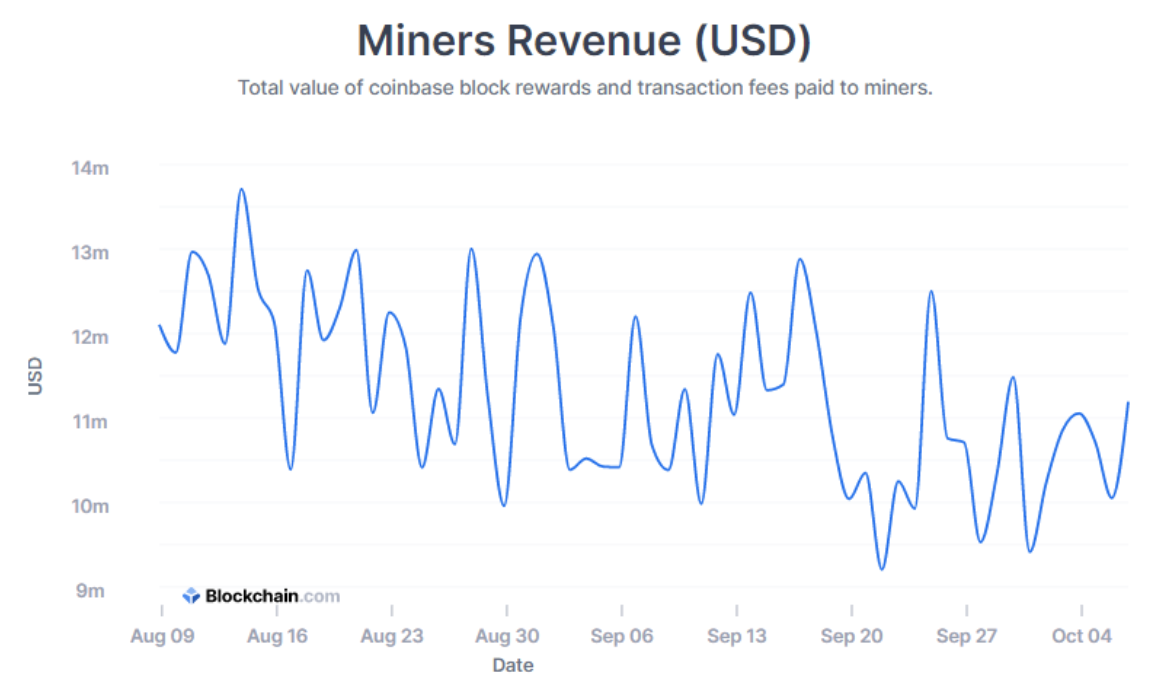 This is clearly a very volatile measure, which is why we take it with a grain of salt. However, this combined with the upcoming dry season in China, makes us think that hash rate will go down in the short-term unless some fundamental change overcomes the seasonal shifts.

Most of the interesting things that came out this week were to do with mining, so we’ll continue to build on that. Three of the largest asset managers in the world have disclosed investments in cryptocurrency mining stocks, and this is making them look pretty good right now.

Riot, HIVE Blockchain Technologies, Hut 8 and BC Group have been reported to receive investments from Fidelity, Vanguard, and Charles Schwab. What is notable here is that retail investors are getting exposure to blockchain technology without having to make the initial decision, which will likely lower their hesitations in the future.

These should be viewed as “experiments”, but are nonetheless good signs for what could come in the blockchain and cryptocurrency space in the coming months.

That concludes this week’s Broker’s Beat. We hope you found it useful and look forward to expanding our offering in the next few weeks to provide you with more news and updates.

But more importantly, we have a brand new newsletter for everyone who wants to stay up to date with news and happenings within the crypto space. Our Timestamp newsletter will go out every Friday and contain all the posts we want to highlight from the busy week. You can subscribe here!

PrevPreviousNew Price Level… What’s Next: Broker’s Beat Volume #12
NextCorporations Convert Cash for Crypto: Broker’s Beat Volume #14Next
We use cookies on our website to give you the most relevant experience by remembering your preferences and repeat visits. By clicking “Accept All”, you consent to the use of ALL the cookies. However, you may visit "Cookie Settings" to provide a controlled consent.
Cookie SettingsAccept All
Manage consent