Welcome to the 21st issue of the Broker’s Beat. This week, we look at the newest trend in mining and how it’s affecting the price of miners, while tying this to the total hash rate.

“Bitcoin miners generated an estimated $522 million in revenue in November, up 48% from October, according to on-chain data from Coin Metrics analyzed by CoinDesk. The sharp revenue increase came as bitcoin soared through November, setting a new all-time high by month’s end after gaining over 40%. Monthly aggregate revenue in November hit the highest level since September 2019. ”

“Abkhazia’s crypto mining-related mayhem is hitting melting point – literally – with a power substation overheating and finally burning with legit and illegal miners alike refusing to slow down their efforts. As previously reported, anarchic scenes have become commonplace in the de facto South Caucasus state, with the parliamentary speaker recounting the tale of a group of villagers who took the law into their own hands, turfing out miners. Blackouts and brownouts have brought entire communities to a standstill amid falling temperatures.”

“Just recently, the China-based bitcoin mining rig manufacturer Microbt released a new ASIC device that clocks up to 112 terahash per second (TH/s). The new machine is one of the top-performing mining rigs on the market, according to today’s network difficulty and electrical rates below $0.06 per kilowatt-hour (kWh). Meanwhile, bitcoin mining rig manufacturing competitors like Strongu and Canaan have also released new products dedicated to SHA256 consensus algorithms.”

US Plans to Take on China in Bitcoin Mining

In our most recent article on the Secure Digital Markets blog, we analyzed the rising star that is Uniswap. In our article, we looked the DeFi token and how far it’s come since it was launched in September.

The price of Bitcoin has been in a decline from the start of the month and since December 1st when it reached $19,937 at its highest, we have seen a decrease of 11.55% measured its lowest point so far made yesterday at $17,635. Today the price has seen a recovery, coming to $18,634 at its highest but has pulled back since to the $18,100 area around which it is currently being traded.

As you can see by looking at the hourly chart the price made a slightly higher low compared to yesterday’s one, which could be an early indication that the downtrend has ended with the hourly candles closing with large wicks on the buyer’s side. However a higher high would be needed for this to be verified, as previously we have seen a breakout from the descending triangle.

Descending triangle structure we have seen from the start of the month could have ended with this breakout as the length of its height matches the length of the downside breakout move. In that case, we are now seeing the next move to the upside but as the prior count got invalidate in which the triangle would have ended as asymmetrical and the 5th wave out of the five-wave impulse from the 26th of November would have developed, it is still uncertain what type of the move we are going to see.

There are some echoes of 2017 playing out in the current mining dynamics. First of all, there aren’t enough miners to meet current demand.

This is different from 2017 because the actual shortage is in chips and not manufacturing. The manufacturers are ready to make more miners, but Samsung and TSMC have limited amounts of chips allocated to them.

Manufacturers have something else holding them back though. The oversupply of miners in 2018 was a direct result of quickly ramping up production to meet demand, and then finding that the demand had disappeared.

Wiser operational management is telling them not to overproduce and be left with extra stock that must be sold as a discount. This tells us that in the future, we will see slower swings in production due to the risk management practices of these companies.

Most miners are selling off their Bitcoin at these high prices, which is also increasing their cash flow and giving them more money to invest in new machines. The effect is heightened in the U.S., where the mining industry is evolving to institutional status.

Financing through leasebacks and other forms of leverage are helping the giants grow quickly, but this is occurring at the expense of smaller pools who don’t have the funds to purchase miners at a competitive price. We think that the rapid expansion capability of American miners will turn the U.S. into a mining superpower very soon.

Looking at the hash rate chart we can see that it has continued increasing since the start of the month unlike the price, which has been in a decline. This growth came after November’s pullback that pushed the valuation from 141M on November 23th to 128.313M. 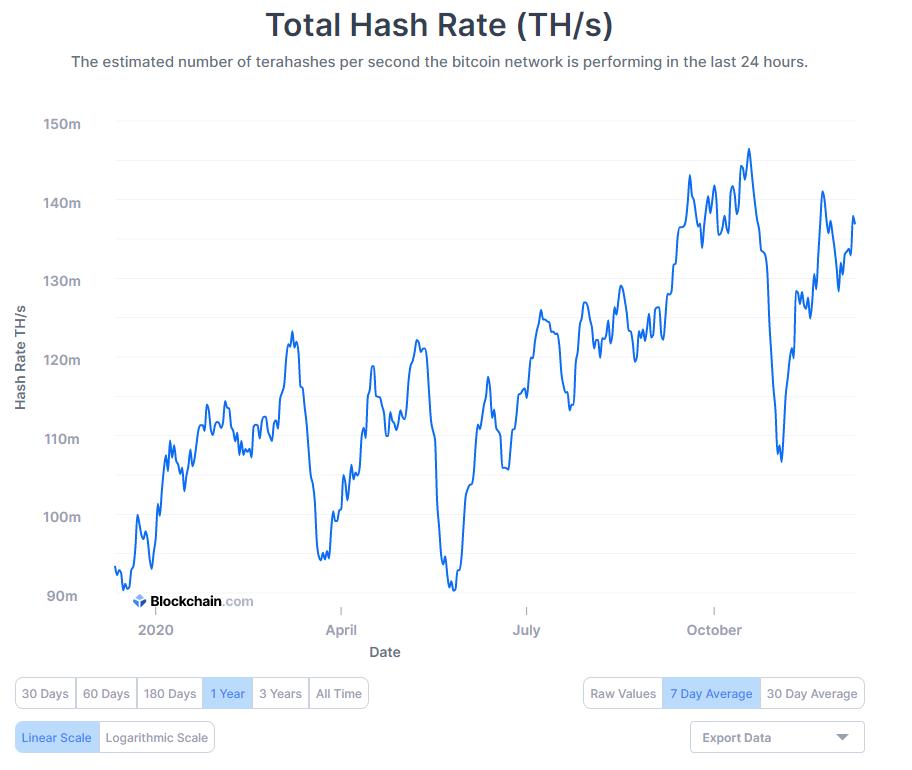 The hash rate is again on the rise but we are now seeing it starting to make a slight decline from the 8th of December. If this decline means the end of the increase and the valuation starts decreasing from here it would mark another lower high compared to the Novembers one and earlier the all-time high made in October.

However this could be a minor pullback with the valuation continuing to move to the upside in which case it is likely headed towards the new all-time high or at least revisiting its vicinity. 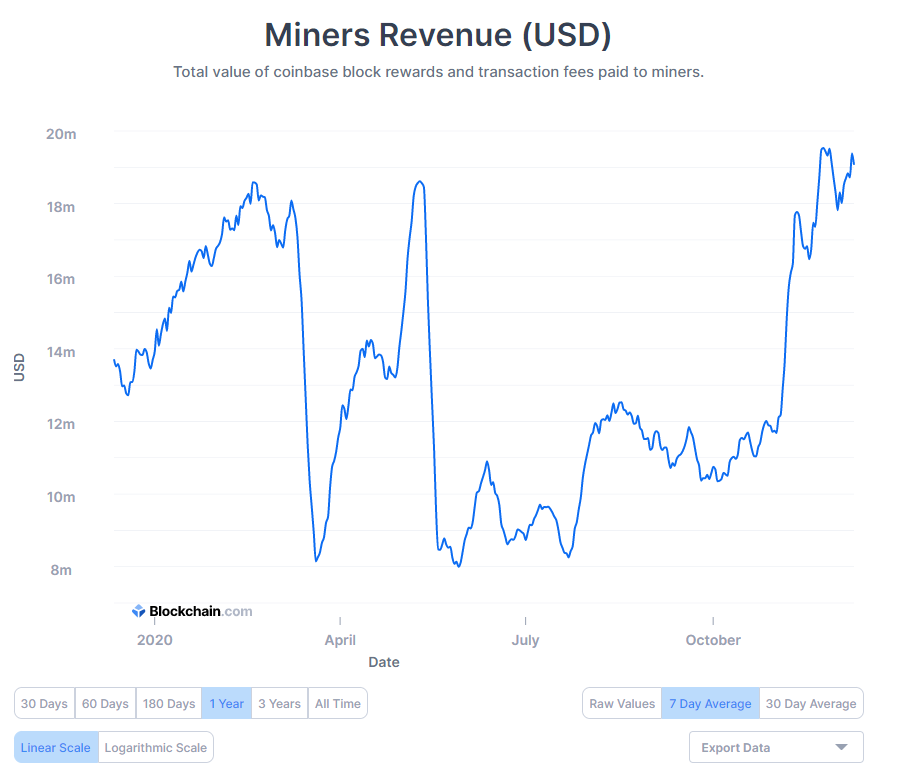 This valuation has made it back to the vicinity of November’s high but hasn’t surpassed it yet. In the following days if the price of Bitcoin increases this is going to change in which case we are to see a new yearly high for this valuation.

In the last week or two, we’ve seen very steady inflows to Ethereum. The launch of ETH2 resulted in $87 million of inflows, according to CoinShares.

The network upgrade seems like a great “catalyst” for a shift that was probably waiting to happen for a while now. An increase in sustainability and scalability to the network was long-awaited, and took away any perceived weakness investors might have seen.

We normally talk about Bitcoin or total exchange liquidity, but this trend with Ethereum reflects an idea that isn’t often brought up: Bitcoin might not have market dominance forever.

All the infrastructure that is being built out in institutions and exchanges will be in place to accommodate this, and that’s the truly undeniable positive effect of everything we’ve seen with Bitcoin for the last few years. Even if it isn’t made king, it will have cleared the path for a different coin to take that status.

Every update is different, since the crypto world moves so quickly, but one constant we’ve seen is big swings in the price of BTC and alts in general recently. Expect to see more of these in the next few weeks as we close out a very volatile year.

We don’t have a research report coming out this week, but next week, we’ll have one on healthcare that identifies some pretty key trends for you. To have this report sent right to your inbox, subscribe here!

PrevPreviousWhat’s Next After an ATH: Broker’s Beat Volume #20
NextPlowing Towards More ATHs: Broker’s Beat Volume #22Next
We use cookies on our website to give you the most relevant experience by remembering your preferences and repeat visits. By clicking “Accept All”, you consent to the use of ALL the cookies. However, you may visit "Cookie Settings" to provide a controlled consent.
Cookie SettingsAccept All
Manage consent