Welcome to the 12th issue of the Broker’s Beat. This week, Bitcoin hit a new price level. Inside this report, we float a new theory about what the halving actually means and whether mining concentration is the variable to be paying attention to.

There is rising tension in the markets, so read on for more price analysis, mining insight, and news about liquidity in the markets.

“As the DeFi space has picked up momentum, the difference between Ethereum and Bitcoin fees has increased from only $10 million in June, to well over $70 million by August.

Thursday’s data shows the fee disparity between the two protocols practically doubled to $140 million in September.”

Could tax-free Bitcoin be one of 2020’s hottest trends?

“According to the trading platform, increasing numbers of investors have been moving their current retirement accounts out of traditional financial institutions that usually only offer stocks and bonds. Interest in cryptocurrencies has been buoyed by a number of high-profile advertising campaigns of late, and some have started to view Bitcoin as a safe haven against inflation and mass sell-offs in the equities market.”

How long will Bitcoin’s stay above $10k last this time?

“Keeping this in mind, and the drop in Open Interest, now, fewer traders are trading with additional leverage because of the lack of clarity. While shorts might or might not pan out, the fact that high leverage is reducing will in turn avoid massive price swings. So now, in the medium-term trend for Bitcoin, considering Bitcoin has still maintained a higher consolidation range at $10,000, a drastic correction is slowly becoming a declining possibility.”

“In a press release, the firm stated that its “long-term objective” was “to have all spot trading pairs available across all regions, including BTC/JPY in the United States, BTC/USD in Europe and Japan, and BTC/EUR in Japan and the United States.”

In our most recent article on the Secure Digital Markets blog, we gave an update on Ethereum’s recent performance and where we expect ETH to go in the future. With DeFi pumping, gas prices in question, and network upgrades in the works, there’s lots to look out for here.

The relative strength index shows lots of fluctuations below and above the ribbon, which signals growing volatility. However, the slow rise and testing of the $10,900 level is encouraging and we see potential for it to head on up to the $12k level if it breaks through. 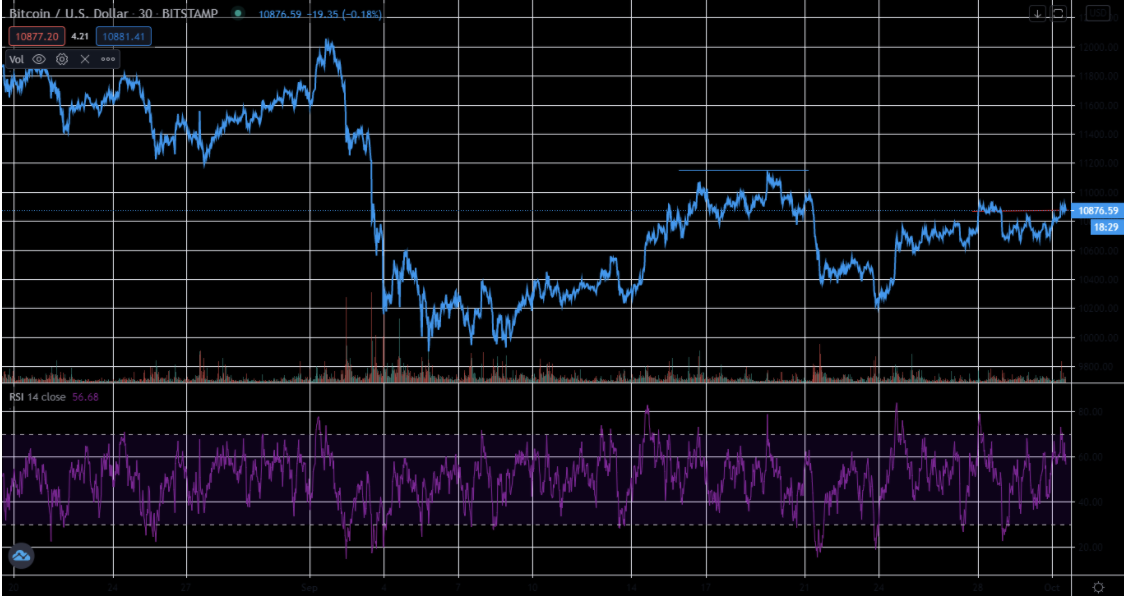 It was also pointed out that this is the longest that Bitcoin has been above $10k, at 65 days. As we head into record-setting territory for Bitcoin, the sentiments will shift. Many are calling for more stable price movement in the lead up to the election and we’re truly curious to see what will play out.

In the meantime, expect various support and resistance levels to be tested in the next few weeks as Bitcoin goes through slow moves. Big swings will be the flavour of November, but for now, just small shifts between key price levels.

We will go back to our regularly planned exporations into the different mining pools next week, but this week, we’d like to highlight this analysis.

AMBCrypto goes deep into the idea that mining dominance and concentration are upstream of most of the price factors that analysts are focused on.

The traditional view is that the Bitcoin halving will cause a jump in the price of Bitcoin, but there’s an interesting counter-narrative we’d like to go into.

With the Bitcoin halving occurring, you have less miner revenue and therefore less incentive for them to contribute to the network’s hash rate. What if – much like in an oligopoly – this resulted in the lower profitability miners being knocked out of the equation and more concentration among miners?

This is linked to lower stability in the network and actually creates a bearish case. There is evidence to show that greater mining concentration results in bearish trends in Bitcoin, and that’s something we’d like to keep in mind in the future.

We keep talking about the all-time high hash rates that Bitcoin is hitting, and this week, there’s nothing new to report. As you can see in the below 30-day chart of the total hash rate, the network is flirting with going through the high again.

We foresee more highs being hit as Bitcoin’s price goes up and miners get a more bullish outlook, although we don’t know what to expect in the weeks following the election, regardless of what happens. 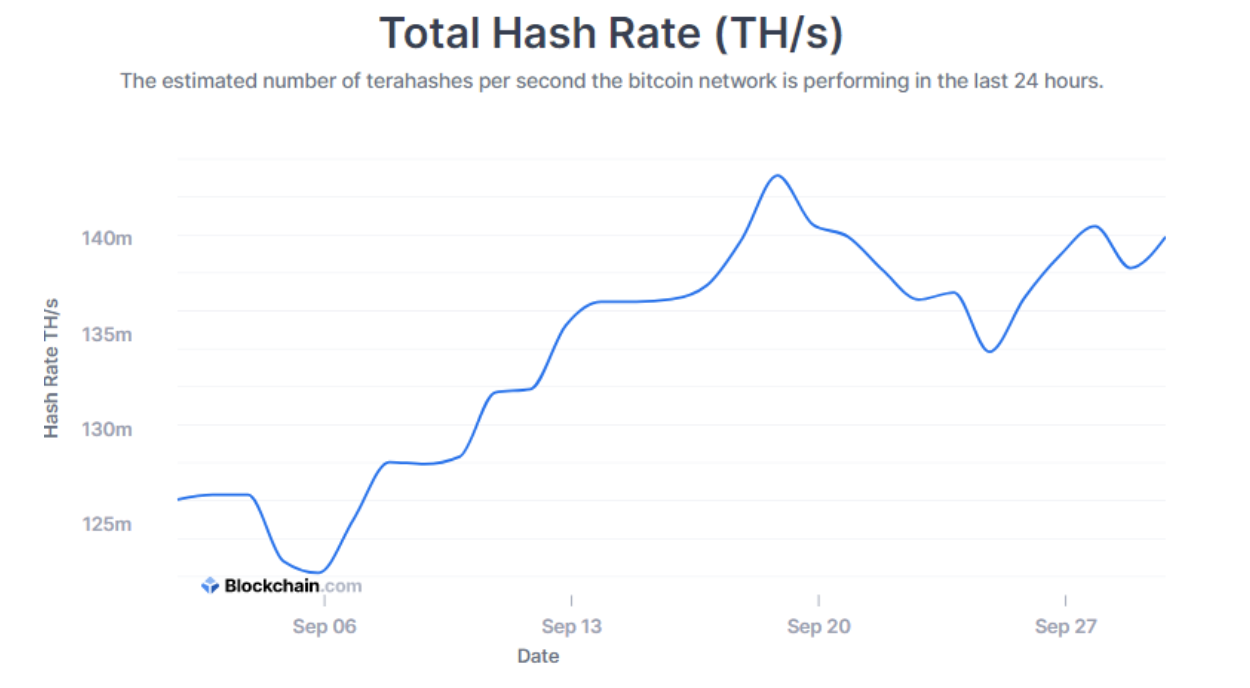 The mining difficulty is at a sustained all-time high right now. You can see in the below 1-year chart that following the mid-September push to an all-time high of hash rate, the network difficulty jumped up and has not dropped since. Both of these metrics speak volumes about the strength of the network and where we see things going. 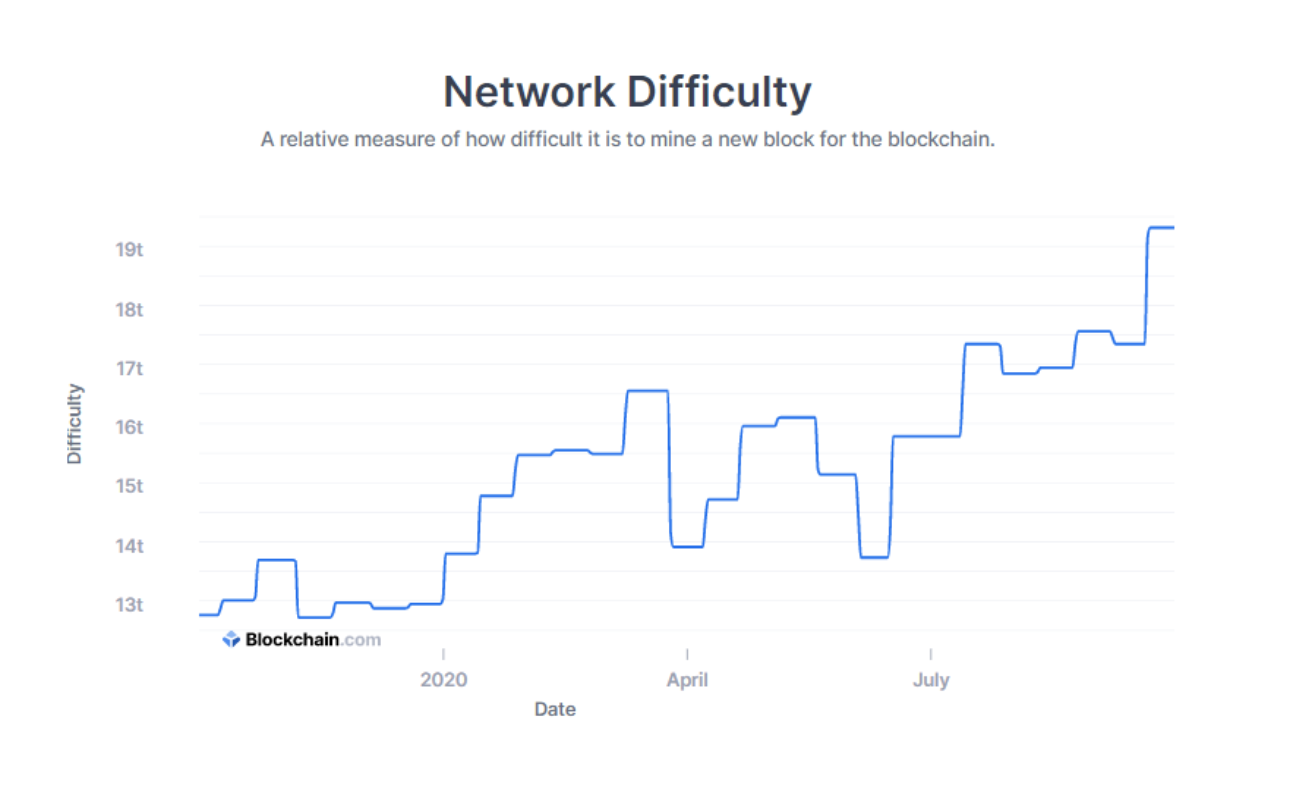 Although we’re a bit late breaking down the last month’s CryptoCompare report, we’d like to point out some key statistics now that will be relevant in the future.

Spot volumes and derivatives volumes are maintaining their levels or even increasing, which is great news for the market at large. As we’ve reported nearly every week in this column, there are new moves happening all the time that enable interested investors to get into crypto more easily.

Binance is still the dominant player, but as we’re seeing with DeFi plays like UniSwap, that is up for debate in the future. Our guess is that this creates a schism in the marketplace where some parties are offering top level trading services and others go the automated market maker route.

Plus, the threat from outside will force innovations within the incumbents. Already, Binance has unveiled their own automated market maker, and it doesn’t require gas to run. More threats to the market results in more benefits to the consumer.

That concludes this week’s Broker’s Beat. We hope you learned something, got a few new talking points to work with, and have some inspiration for what to look into today.

PrevPreviousFight for Market Supremacy Continues: Broker’s Beat Volume #11
NextLegalize Mining! What Will This Do: Broker’s Beat Volume #13Next
We use cookies on our website to give you the most relevant experience by remembering your preferences and repeat visits. By clicking “Accept All”, you consent to the use of ALL the cookies. However, you may visit "Cookie Settings" to provide a controlled consent.
Cookie SettingsAccept All
Manage consent