Welcome to the 19th issue of the Broker’s Beat. This week, we looked at the changing mining dynamics for Bitcoin, as well as the overall trend for ETPs and how it will affect the bull market at large.

“As Chinese authorities make it harder than ever to exchange cryptocurrency into fiat, miners may be forced to move to other jurisdictions, local sources say. On Monday, crypto industry blogger Colin Wu tweeted that miners in China have been struggling to pay for electricity after the authorities started cracking down on over-the-counter (OTC) brokers in the country.”

China’s leadership in the Bitcoin mining industry will be challenged

“China has a lot of advantages in the Bitcoin mining industry, though it won’t last forever, as more countries are entering the space. If you talk about Bitcoin (BTC) mining, you have to talk about China. China has become a giant in the Bitcoin mining ecosystem with major mines and pools, quick, cheap labor and a majority control of the world’s hashing power. So, should you go set up a mining operation there? Do the pros outweigh the cons? Is China actually a threat to the Bitcoin ecosystem? Let’s look at the state of Chinese mining.”

“A new bitcoin mining pool, launched in beta by analytics platform Blockseer, will refuse to process transactions that involve certain blacklisted wallet addresses, in a bid to ensure it does not inadvertently facilitate criminal activity. The pool will use Blockseer and Walletscore forensics data, as well as the United States OFAC blacklist for crypto, to filter out any transactions considered “nefarious” from blocks posted by the group.”

The rise of major Bitcoin mining institutions is inevitable

“There are very few investments that can deliver an infrastructure-style downside case with a venture-capital-style upside. The combination of energy arbitrage with accumulating a balance sheet of Bitcoin (BTC) can deliver this. That is why we are seeing a rush of institutions pouring into the Bitcoin mining space and starting to build out mega facilities.”

“Investview, Inc. (OTCQB: INVU) a diversified financial technology and global distributor organization that operates through its subsidiaries to provide financial education tools, content, research and management of digital asset technology that mines cryptocurrencies, with a focus on Bitcoin mining and the generation of digital assets, has completed its third closing under the Securities Purchase Agreement entered into on April 27th, 2020 , as amended, with the sale of a convertible secured promissory note in the amount of $1.3 million in a private placement. The terms of the transaction are itemized in the 8K filed November 9th, 2020.

In our most recent article on the Secure Digital Markets blog, we did our own Cardano price analysis, where we analyze where this cryptocurrency is going based on recent price movements.

The price of Bitcoin has increased since Monday by around 17%, coming from its lowest at $15771 to $18453 at its highest point today. Now the price is being traded at around $17840 as it appears that the price started experiencing some selling pressure.

On the hourly chart, you can see that the price made another parabolic rise like it did from the 3rd to the 6th of November but with stronger momentum. This is assumed to be the ending wave out of the five-wave impulse from the 3r but is also the ending wave of the highest Minute count from back in March.

The price has made a significant high which hasn’t been made since December of 2017 when the all-time high was made. This is why we could start to anticipate the start of the selling round shortly as most likely the sell orders have been placed.

Now we could see another rise to the upside as potentially the FOMO kicks in but I would expect it as a fast spike that is set to activate the furthest sell orders before the downturn starts. It appears that the price is consolidating and that is going to form a triangle so now at least we are going to see a temporary halt in the rise.

The market sentiment is still bullish and this would be hard to shift unless the whales start applying serious selling pressure and push the price significantly lower in a short period of time.

This week we saw China’s mining dominance come into question in the mainstream.

I recently saw an article that presented Bitcoin mining as one of the few options that investors have to get upside at the level of an angel investor with infrastructure-style downside. The risk-reward ratio is steeply in the favour of investors and is something that will be sure to attract more competitors to the fray in the coming years.

China may have been one of the first to really go all-in on it, but with changing economics of mining due to the halving and the price pump, we expect to see this dominance further erode over time.

Also of note is the idea that miners will start to have more power over the network. Blockseer is currently trying to push for an increase in compliance standards by refusing to validate transactions done by blacklisted wallets.

Although the logic here is clear, it also does set a dangerous precedent. Miners were never meant to be able to censor the network, and if they are, this calls the entire investment thesis into question.

So with ethics and censorship entering the fray as China loses its dominance in the space, we would highly recommend you keep a watch out for big moves in mining in the coming weeks.

The total estimated number of terahashes per second has been on a halt from last Tuesday the 10th of November when it reached 128.396M at its highest point. Since then it has been in minor decline and is currently sitting at 124.87M. 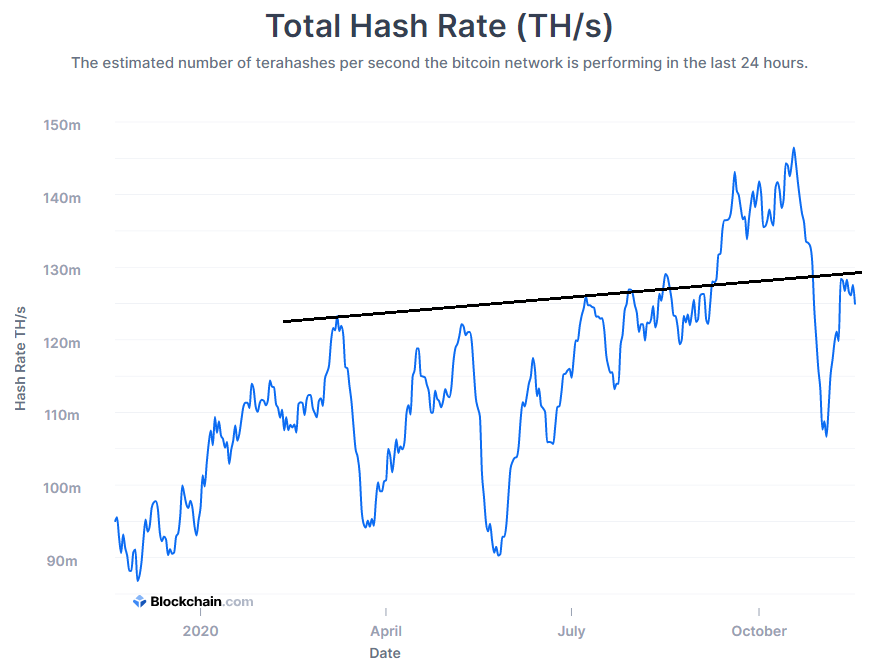 On the chart above you can see that the valuation came up to the ascending trendline which represents the resistance level from the ascending range that started forming from March. This range was breached in September but after making an all-time high in October it pulled back to the levels close to its June low.

This was most likely a higher low compared to the one in May as it appears as the same degree move as the downfall made in May. 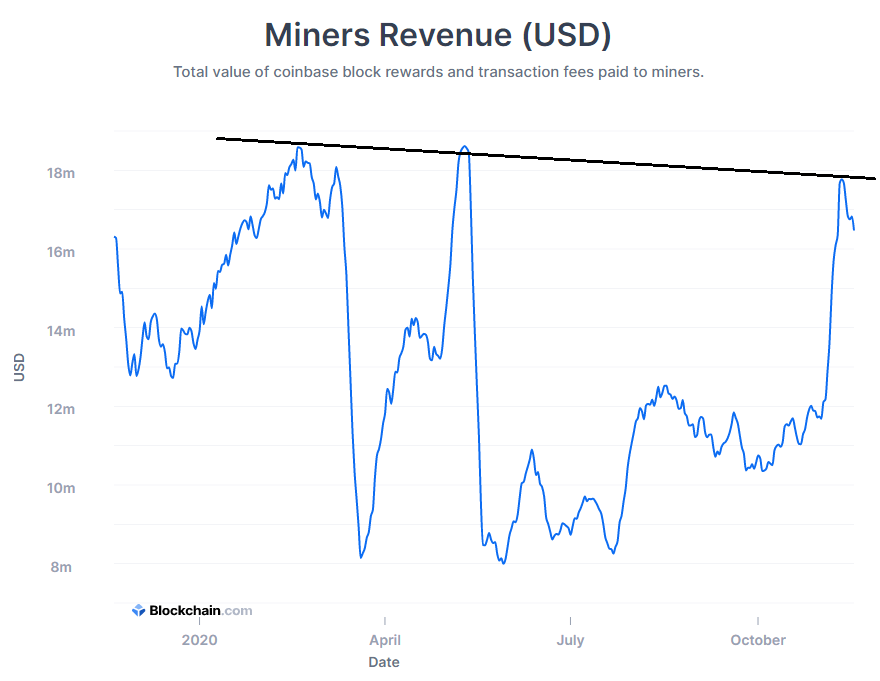 Looking at the miners revenue we can also see a similar pattern as the valuation also reached a significant resistance level and started pulling back from the 10th of November. It fell down from 17.769M to 16.47M. Unlike in the case of a hash rate chart, the valuation of the miners revenue made a lower high compared to the one made on May 10th just before the halving.

But as the price of Bitcoin increased this valuation would be expected to increase as well in the upcoming period.

The Bitcoin pump that keeps on giving!

Everyone’s talking this to death, so we won’t bore you with a celebration of breaking through different resistance levels and hitting all-time highs against some currencies.

But what we will do is talk about why this time is different. A large part of the 2017 bull run for Bitcoin was informed by demand for ICOs. At the time, the only way to enter the cryptocurrency ecosystem was to buy Bitcoin and then exchange it into something else.

3 years later, things are very different. This is a distinct Bitcoin bull run. Altcoins may be benefitting (and may in the end benefit the most), but right now, people want Bitcoin.

We see this demand play out everywhere. According to CryptoCompare, the Grayscale Bitcoin Trust is seeing record inflows and volumes for exchange-traded products as a whole have soared 53.5% to reach $173.5 million per day.

An additional measure that gives confidence in Bitcoin’s fundamentals is that open interest for Bitcoin Futures on the CME is at (or very close to) its all-time high that was set in August 2020.

We’re seeing these secondary markets for Bitcoin excel, and this indicates strong interest in Bitcoin from players outside of the cryptocurrency ecosystem.

Finally, the number of addresses with balances of $10 or more of Bitcoin – basically total wallets that aren’t empty – is now at an all-time high. More users is the best measure of the long-term health of the network, and that’s why this measure gives us such confidence.

It seems like every week brings exciting developments and the price levels to match them. In the next few weeks, we expect to see all-time highs and many more big announcements in the space.

On another note, our research team will be putting out a piece on the real estate industry tomorrow. To have this report sent right to your inbox, subscribe here!

PrevPreviousThe Evolution of Mining: Broker’s Beat Volume #18
NextWhat’s Next After an ATH: Broker’s Beat Volume #20Next
We use cookies on our website to give you the most relevant experience by remembering your preferences and repeat visits. By clicking “Accept All”, you consent to the use of ALL the cookies. However, you may visit "Cookie Settings" to provide a controlled consent.
Cookie SettingsAccept All
Manage consent