Welcome to the 22nd issue of the Broker’s Beat. This week, we celebrate an all-time high, talk about why this ATH is different, and introduce the mining company MicroBT.

Microgrids Could Drive Energy Costs Down for Cryptocurrency Miners

“Energy is one of the biggest expenses incurred by cryptocurrency miners. In fact, according to Bitcoin.com, “the gigawatts of electrical consumption powering industrial bitcoin mining today consumes as much as seven nuclear power plants.” Or, as Microgrid Knowledge has reported, “It takes the energy of nearly 15 households to produce just one Bitcoin. Not surprisingly, the rapidly increasing amounts of energy being consumed by Bitcoin and cryptocurrency “miners” – operations that create new cryptocurrency by competing to process new transaction blocks – has been making headlines of late amid wild gyrations and soaring exchange prices. ”

“Los Angeles, Dec. 13, 2020 (GLOBE NEWSWIRE) — Cryptocurrency miners are one of the main figures in the crypto economy. They mint new coins that are more often than not sold on the market so they can keep their operations running. Miners help secure the network and are rewarded for doing so. Most cryptocurrencies – including bitcoin, ether, and Litecoin – reward miners with a specific amount of coins per block found, plus the amount of collected fees included in the transactions in the block they found.”

“Cleanspark Inc., a Nevada-based corporation, said Thursday that it is acquiring U.S. bitcoin miner ATL Data Centers for $19.4 million in a deal to be completely settled in shares. According to a press statement, Nasdaq-listed Cleanspark intends to quadruple the number of ASIC bitcoin miners in operation at ATL. This will happen once the firm adds another 30 megawatts (MW) of electricity to the facility by April 2021, bringing total capacity to 50MW.”

“Bitcoin miners generated an estimated $522 million in revenue in November, up 48% from October, according to on-chain data from Coin Metrics analyzed by CoinDesk. Measured by revenue per terahash (TH), the unit measurement for the speed of cryptocurrency mining hardware, miner revenue hit six-month highs as it climbed above $0.15 multiple times in November, the highest level since early May, according to data aggregated by mining software company Luxor Technologies.”

“The GDA Group, an established North American financial institution fostering the adoption of digital assets and other disruptive technologies, has launched its latest venture, Global Fund Management. The venture will provide simple and secure digital asset exposure for institutional and accredited investors.

In our most recent article on the Secure Digital Markets blog, we analyzed the quickly growing Filecoin. This recently-launched coin has been making waves in the crypto community and we wanted to see how recent developments have served it.

Note: This column was written before the ATH of above $23k we saw yesterday. However, it’s nice to see that our prognostication was correct, which is why we’ve included it.

The price of Bitcoin has been increasing since the start of the week. From Monday’s low at $18,984 we have seen an increase of 13.57% measured to its highest point so far which was made today with the price coming to $21,568 at its highest. Currently it is being traded slightly lower but is still in an upward trajectory.

On the hourly chart, you can see that the price broke the all-time high and made it past the upper horizontal resistance level at $19,677 making a new all-time high today. This ascending move started developing after a breakout from the descending channel that was formed from the start of the month just below the mentioned horizontal level.

Now that a breakout was seen and the price moved in an impulsive manner it means that we have seen the development of yet another five-wave impulse to the upside. The increase seen from Monday’s low, in that case, would be its 3rd wave which is why further upside would be expected from here.

A minor pullback is to be anticipated as the 4th wave would be starting soon but this will be a small retracement that is set to establish support for a brief time before further upside movement will be seen.

As two more waves are to develop the price has more room to go but its still uncertain how much before the bullish momentum ends. Most likely we are going to see this ascending move developing to around the $22,800-23,500 range where the next resistance might be which correlates with the length of the 1st wave.

After this move ends a larger correction would be anticipated as this would mark the completion of the higher degree 5th wave.

This week, we’re going to highlight a mining company we think is doing great work: MicroBT. This will be part of our plan for this column going forward.

Since its inception in 2016, MicroBT has steadily grown to become one of the leading mining rig producers globally, comprising more than 10% of the total BTC network hashrate. Recently, they unveiled the M30S++: the newest installment in their flagship mining rig model, Whatsminer, that reports processing speeds of up to 112 terahashes (i.e., 112,000,000,000,000 hashes) per second (Th/s) and a power efficiency of roughly 31 joules per terahash (J/TH).

Selling for $3900 per unit, The M30S++ is intended to be in direct competition to Bitmain’s S19 Pro, which reports 110 TH/s and 29.5 J/TH comparatively. The company puts a very large emphasis on R&D, with over 40% of the company’s personnel dedicated to this function and holding nine significant blockchain-related patents.

MicroBT was founded in July 2016 by technologist and entrepreneur Yang Zuoxing, a former lead director behind Bitmain’s acclaimed Antiminer series, and is headquartered in Shenzhen, China.

The total estimated number of terahashes per second of the Bitcoin network has been moving sideways since the start of the week as it made a descending move followed by a recovery. 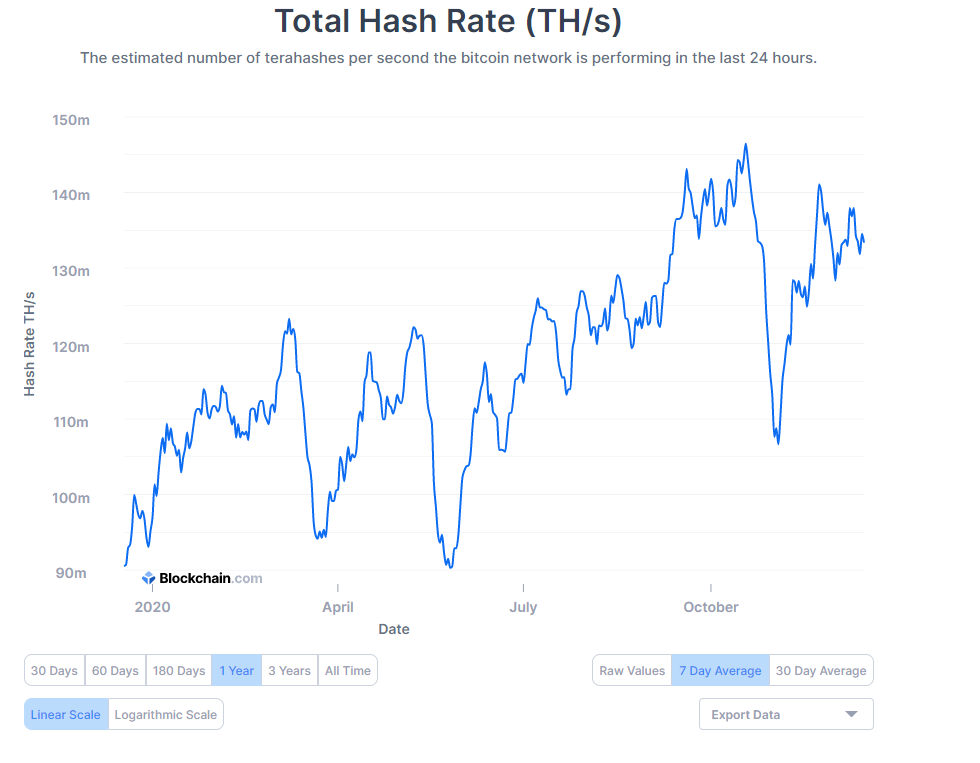 On the chart above you can see that the valuation was decreasing since the 10th of December coming from 137.949M at its highest to 131.827 which was its lowest point on Sunday but made an increase to 134.53M on Monday.

As again it started decreasing from Monday’s high we are seeing the formation of a symmetrical triangle which means that a breakout from both sides is equally possible, but considering that we have seen an increase from the start of November this can be interpreted as a consolidative range before further upside movement.

The miners revenue chart is showing a similar pattern as we have seen sideways movement for this valuation from the start of the month as well. 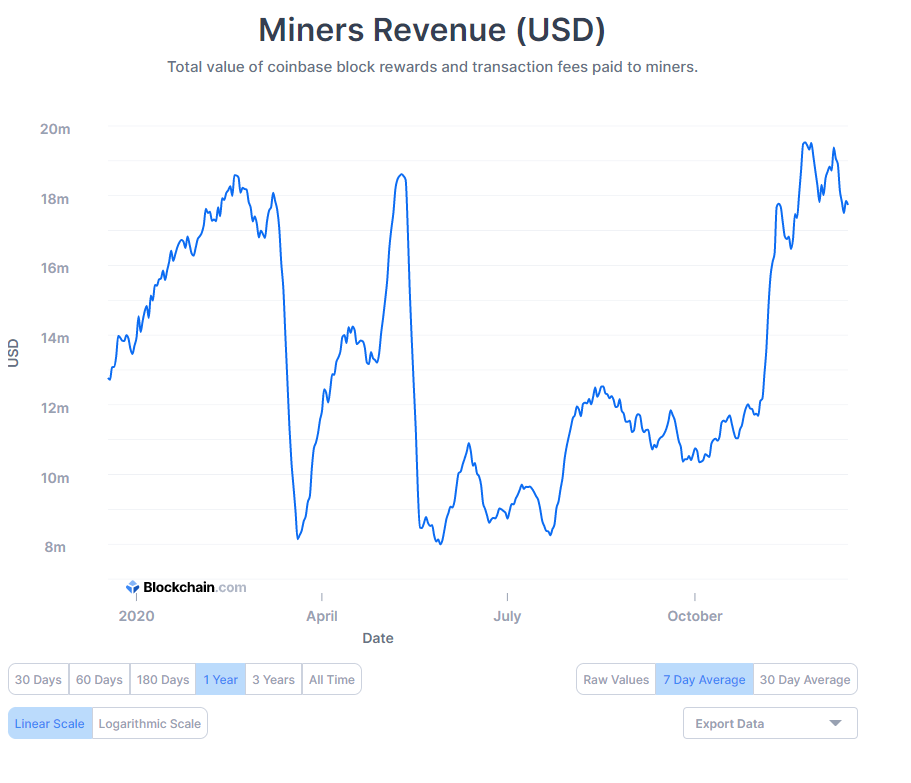 At first the total value of block rewards and transaction fees paid to miners has increased from 17.81M to 19.384M at its highest on the 8th of December, but from there made a decrease to 17.5M last Sunday.

As this can also be a forming symmetrical triangle before further upside movement further consolidation would be expected but shortly after a breakout to the upside.

I like to break down the way we think about liquidity and buyers into two (or three) big groups. You have your standard retail investors, then you have the people who are acquiring millions of dollars in Bitcoin. Institutional investors are a subgroup of the latter.

Obviously, that is a broad split and there are many different classifications that can be applied, but the buying behaviours are very different in their effect on liquidity.

With the whales who are buying $20MM+ in Bitcoin, it takes just a few of them to move the markets. And that’s a large part of what seems to be informing this new bull market. There are countless think pieces out there detailing why “this time is different”, so we won’t get into that too deeply. But the main thing to note is that this is less of a bull run informed by small investors jumping in based on FOMO.

This year has seen institutions and billionaire investors slowly show more support for Bitcoin, and as a result, we’re seeing less selling pressure during this recent run. Fewer people are making a quick buck and leaving. The HODLing ethos seems to be manifesting itself, and this 25% jump in just a few days is the result.

Every update is different, since the crypto world moves so quickly, but one constant we’ve seen is big swings in the price of BTC and alts in general recently. Expect to see more of these in the next few weeks as we close out a very volatile year.

We don’t have a research report coming out this week, but next week, we’ll have one on Bitcoin that will answer some questions and lay out the thesis we make to our clients. To have this report sent right to your inbox, subscribe here!

PrevPreviousMinor Correction, but What’s Next? Broker’s Beat Volume #21
NextAnother ATH Celebration: Broker’s Beat Volume #23Next
We use cookies on our website to give you the most relevant experience by remembering your preferences and repeat visits. By clicking “Accept All”, you consent to the use of ALL the cookies. However, you may visit "Cookie Settings" to provide a controlled consent.
Cookie SettingsAccept All
Manage consent