Welcome to the 18th issue of the Broker’s Beat. This week, we dissected the supply crunch on Bitcoin and where we see the future of mining going.

“Bitcoin miners are arguably the most vital part of the entire BTC ecosystem. By solving complex computational problems, they process Bitcoin transactions and increase network security. Miners receive newly-created bitcoins and transaction fees as rewards for their efforts.

Whether to keep (or HODL) the freshly-minted bitcoins or to sell them is entirely their decision. However, once they do sell in large portions, BTC’s price is inclined to suffer.

“Siberia is one of the more attractive places in the world for Bitcoin mining. Its abundance of natural resources translates into low electricity prices, and its cold climate means that the miners do not have to spend as much energy on cooling. Is proximity to China, the main producer of mining equipment, should also make the outfit’s supply chain more efficient.”

“In addition to the USDS addition, the Stablecoin as a Service offering from Stably will benefit clients already utilizing applications on the DigitalBits blockchain. With the service, brands, and enterprises to quickly and easily launch secure, compliant stable assets on-chain with the foremost in blockchain technology.”

“Bitfarms, which provides computing power to cryptocurrency networks such as Bitcoin (BTC) and operates five computing centers in Canada, has signed a non-binding memorandum of understanding with a private energy producer, thanks to which the company will be provided with up to 200 MW of electricity capacity in an unnamed country in South America without any deposits or any purchase commitments – and the direct price of the electricity will average 2 US cents per kWh, said the press release.

In our most recent article on the Secure Digital Markets blog, we did our own Dash price analysis, where we analyze this digital cash payment option and saw how recent developments have served it. There are lots of important takeaways to pick out here!

The price of Bitcoin has been increasing from yesterday when it came down to $15,087 at its lowest point. We have seen an increase of 4.23% measured to its highest point today at $15,725 around which it is currently being traded and is still in an upward trajectory.

Looking at the hourly chart, we can see that the price came down yesterday to the support level of the symmetrical triangle which was forming by the ascending trendline from the 4th of November and the descending one from its last Friday’s high.

As the price found support there the increase that followed has pushed the price of Bitcoin to the vicinity of its prior high, even slightly below it, but it appears that a breakout has been made from the symmetrical triangle on the upside. We have seen a similar price behaviour on Monday when the price made its breakout attempt but it failed to do so, pushing the price back down.

Now, however, we have seen the completion of the symmetrical triangle with its apex being above the price and with strong bullish momentum seen, this is highly likely to be a proper breakout.

If this is true, then we have seen the completion of the 4th wave out of the next impulse to the upside forming the mentioned triangle, which is why now the 5th wave has started to develop. Its price target would be somewhere from $16,800 to $17,200 before it develops fully, but we are yet to see if this is the end of the bullish period for the price of Bitcoin, as after its completion a significant downturn can be anticipated.

If you were to distill all the values of the Bitcoin world down to one word, it would be decentralization. It’s the governing principle that almost everyone in the industry puts above all else. And the people who don’t usually have a profit motive.

This is why it’s always been so surprising to see how centralized the Bitcoin mining industry is. You have a small handful of miners holding most of the hash power, and China being the dominant power in the space.

But right now, that trend is reversing. We’ve talked the seasonality of Chinese hydro prices to death, so we won’t go into that again. But basically, the Chinese mining cartel is breaking up as hydro prices go up within their nation. Other nations have wised up to the potential tax revenue that can be gleaned from the Bitcoin mining industry and are allowing the industry to develop in their homeland as well.

Canada, Iran, the United States, and Russia are just a few examples, but it is happening everywhere that miners can obtain cheap power. Furthering this trend, you have companies like DMG trying to legitimize mining in the U.S. by working with regulators to stay in compliance with all rules and laws.

So going forward, this big trend will play out over and over again. China is losing dominance, and it’s a good thing for the industry at large.

Since the start of November we have seen the start of the rising trend in the total hash rate. Prior to that the estimated number of terahashes per second have been in a steep decline and have come down from 146.485M on the 18th of October to 106.65M on the 3rd of November.

The hash rate effectively fell to the levels on which it was back on June 23rd and the reason behind this decrease is the ending rainy season in Sichuan province, China. Miners have been enjoying cheap hydroelectricity, but now as it ended they have started relocating and thus, they turned off their rigs.

This kind of decline in a significant amount also occurred immediately after the halving when it fell from 121M on May 12th to 90.4M on the 27th of May. The hash rate valuation continued to make its all-time high in October so the pullback even though made a significant decrease isn’t that worrying, especially considering that the valuation currently sits at 128.39M which are the same levels as on September 8th. 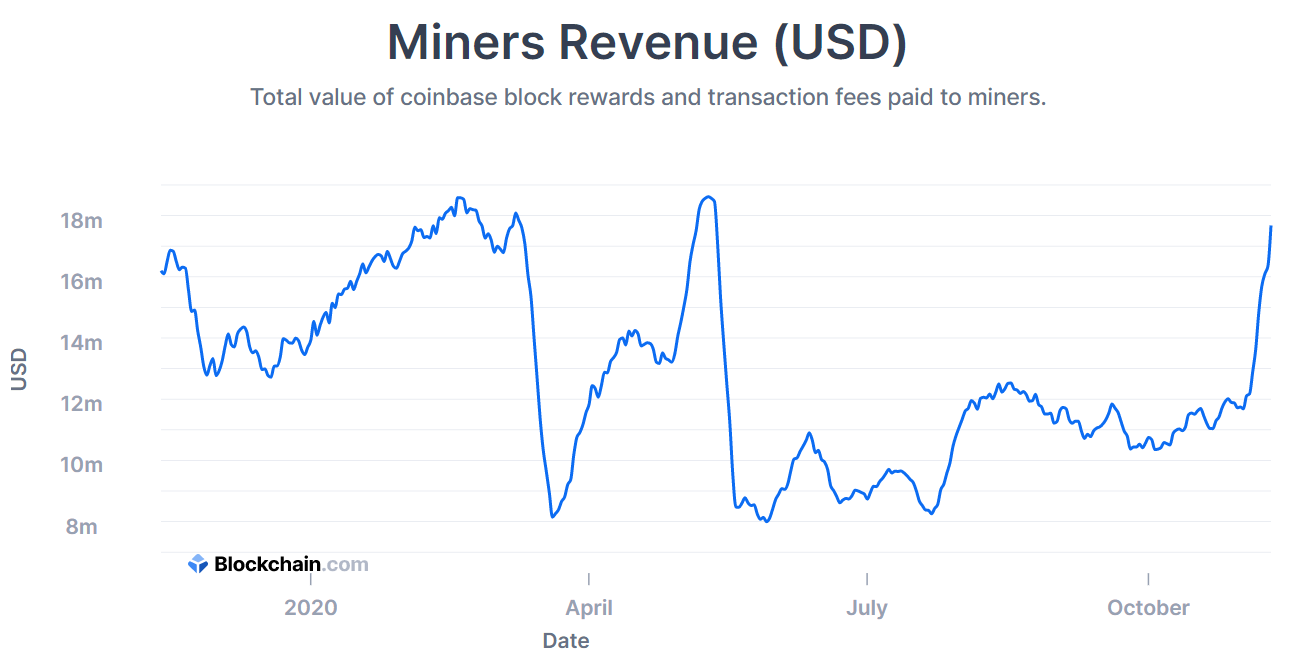 Looking at the miners revenue chart, we can see that it’s currently sitting at 17.68M which is the highest it has been since the halving when it was sitting at 18.56M. As the Chinese miners get back and the mining revenue continues increasing we are likely to see an increase in hashrate in the upcoming period and the new all-time highs.

Everyone is excited about the Bitcoin pump, but not enough people understand the mechanics behind it. What is causing it to rise so much and is it likely to continue?

Well, we’re seeing a supply crunch that may continue independent of the election and other chaotic developments. Grayscale, MicroStrategy, and Square all represent big buyers of Bitcoin.

Further, we’re seeing more retail investors move their funds from exchanges into their own cold wallets. That represents one extra step that is necessary before the funds can be sold, which means we’ll probably see far less selling of BTC from this cohort.

The ratio of HODLers to traders indicates bullish behaviour as well as furthering this supply crunch.

At the same time, the advent of DEXs means competition for liquidity and market-making, which could further this shortage. Liquidity can increase while supply decreases. This means that exchanges are competing to hold enough liquidity and that creates demand on the BTC in circulation. Although not expected to overtake CEXs anytime soon, this type of competition will probably bring a lowering of fees that investors will benefit from.

These three factors and how they play into the overall supply shortage of BTC are worth looking at, because they’ll predict where BTC is going in the future.

We continue to have big weeks for Bitcoin and crypto in general. The chaos always seems to be over… before there’s more. So keep an eye out for more updates from us and we’ll be in touch next week.

On another note, our research team will be putting out a piece on the real estate industry in just a few days. To have this report sent right to your inbox, subscribe here!

PrevPreviousThings Are Heating Up: Broker’s Beat Volume #17
NextOn the Way to an ATH: Broker’s Beat Volume #19Next
We use cookies on our website to give you the most relevant experience by remembering your preferences and repeat visits. By clicking “Accept All”, you consent to the use of ALL the cookies. However, you may visit "Cookie Settings" to provide a controlled consent.
Cookie SettingsAccept All
Manage consent