Welcome to the 17th issue of the Broker’s Beat. This week, we investigated a big increase in miner revenue and talk about the effects of the recent Bitcoin bust. Additionally, we’re testing out sending the Broker’s Beat out on Saturday to see how that suits our readers. Please let us know!

As always, rising tensions in the U.S.A. mean there’s high possibility for profit. So read on for more price analysis, mining insight, and news about liquidity in the markets.

Bitcoin surges above $15,000 and is closing in on record

“ ‘Bitcoin comes out stronger after each challenge,’ said Michael Sonnenshein, managing director of Grayscale Investments, a digital currency asset management firm. ‘People are looking at bitcoin as a store of value and inflation hedge.’ ”

“According to data from Blockchain.com, BTC miner revenue has soared to levels not seen since Bitcoin’s third halving in May 2020, which reduced the miner block reward from 12.5 BTC to 6.25 BTC.

As such, BTC miners’ revenue hit $20.8 million on Nov. 4. According to Blockchain.com, this is the highest point recorded since September 2019, when the miners’ block reward was twice as much as now.”

Bitcoin: $1bn seized from Silk Road account by US government

“The Internal Revenue Service’s Criminal Investigation unit said it used third-party company to analyse Bitcoin transactions that had been executed by Silk Road.

This led it to an address belonging to “Individual X”, who is alleged to have hacked the funds from the marketplace.

Law enforcement officers in turn took control of the sum on 3 November, and the DoJ claims the funds are now subject to forfeiture.”

“In its filing — the first of its kind involving a Canadian cryptocurrency exchange — the CRA says it needs all the information to ensure that Coinsquare’s customers have “complied with their duties and obligations” under Canadian tax laws.”

In our most recent article on the Secure Digital Markets blog, we did some Ripple price analysis, where we analyze this sharded multichain and see how recent developments have served it. There are lots of themes and ideas to pick out here!

The price of Bitcoin has been increasing since the start of the week and came up from its Monday’s low at $13,221 to $15,000 at its highest point today, which is an increase of 13.46%. At the moment the price is being traded slightly lower but is still showing strong bullish momentum.

This parabolic rise is the result of a breakout above last year’s high at $13820 made on June 26th 2019, which occurred after the price fell down to its July’s high and retested it for support.

As this horizontal level turned support and was validated by two interactions it established a firm base for what happened next. From the 27th of October we have seen the development of a three-wave move which was most likely the 4th wave out of the higher degree impulse which started on the 8th of September.

If this is true, now we are seeing this 5th wave out of the Minute count which is set to push the price of Bitcoin for further highs. Now as the price is in a firm uptrend it is still unclear when this increase might end, but considering that this breakout has just started there is still more room to go.

The next significant horizontal point to the upside is at $15791 so the price increase could get stopped out there.

It seems like everyone is getting into mining these days!

They’ll be partnering with BitRiver to form Bit+. Already operating with 10MW of capacity, the venture will result in the creation of a low carbon footprint mining facility.

What we find far more interesting about this is the fact that we’re seeing so many hydroelectric power companies get into mining. It’s very likely that this will become a typical hedge for these companies going forward. They’ll always know they have a price floor on their power, because as soon as it gets cheap, they can use it to power mining operations.

This will change the way the space works, and is one more way that the cryptocurrency industry is affecting other, much more established industries.

We’re frequently discussing the seasonal changes in the hash rate, but the effects are still resounding a month into the end of the wet season. As we’ve pointed out before, the wet season is often accompanied by cheaper hydroelectric power.

Near the end of that, China begins to switch over their mining power to other sources, which results in a drop of hash rate. You can see the effect in the 1-year chart below. 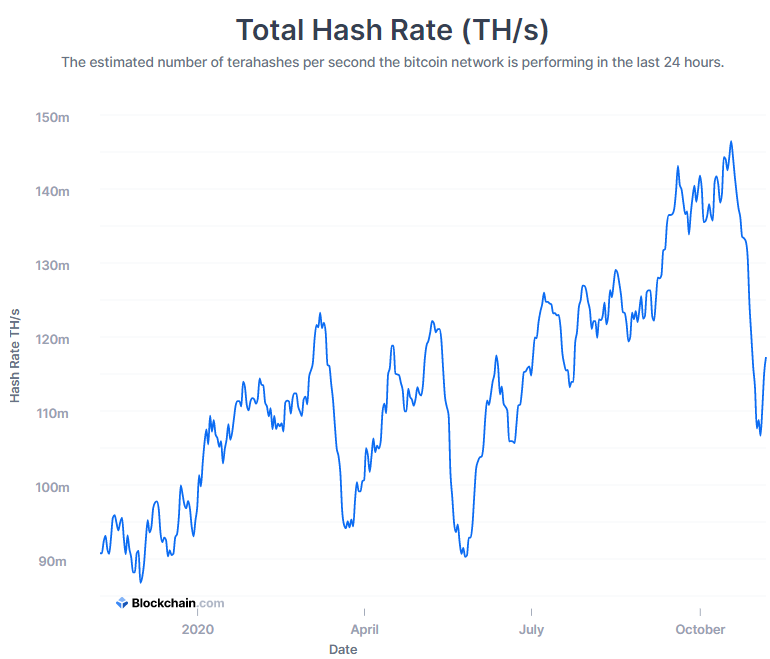 Conversely, we can see miner’s revenue going through a major spike at the same time. These pre-halving levels are surprising to say the least, but indicate that the price of Bitcoin and the amount of competition have a strong effect on the market dynamics here. 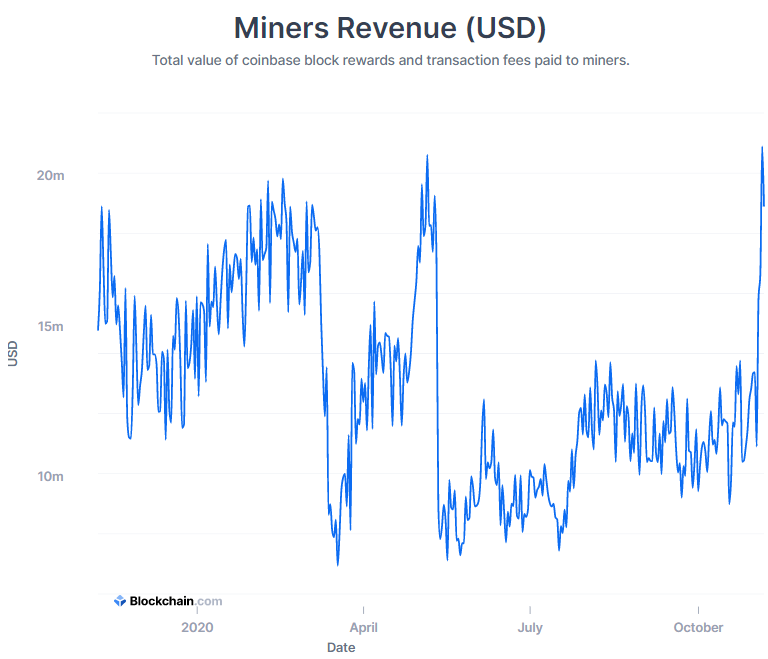 One final thing we would like to note about the above hash rate analysis is how it’s affecting overall liquidity. The market is showing a noticeable spike in the flow of assets from miners to exchanges, and this should be a strong indicator of the price ceiling that will occur due to miner sentiment.

Miners are not as risky as your average speculator, and if they see an opportunity to cash out and lock in gains, they will. That’s what is occurring right now as the price goes above $15k, and probably won’t reverse until the market becomes more comfortable at this new price level.

The other big liquidity event that may affect Bitcoin this week is the $1 billion in Bitcoin that was seized from Silk Road by the US government.

Originally thought to be a whale transaction, this has now been identified as a major bust. After the Silk Road was broken up in 2013, many were left wondering where assets had gone.

Now it seems like the government has tracked these assets down and confiscated them. The IRS teamed up with an analytics company to track down the hacker in possession of this ~70,000 in Bitcoin.

It’s never clear whether these big busts help or hurt Bitcoin in the long-run. For now, it doesn’t seem like the recent pump in Bitcoin’s price has been affected, but how does the general public’s view change based on this high profile bust?

This was a big week for Bitcoin and major movements in general. We can expect to see more price swings as the U.S. political scene heats up, so expect more from us in the coming weeks.

On another note, our research team will be putting out a piece on gambling in just a few days. To have this report sent right to your inbox, subscribe here!

PrevPreviousWet Season is Over for China: Broker’s Beat Volume #16
NextThe Evolution of Mining: Broker’s Beat Volume #18Next
We use cookies on our website to give you the most relevant experience by remembering your preferences and repeat visits. By clicking “Accept All”, you consent to the use of ALL the cookies. However, you may visit "Cookie Settings" to provide a controlled consent.
Cookie SettingsAccept All
Manage consent