Wet Season is Over for China: Broker’s Beat Volume #16

Welcome to the 16th issue of the Broker’s Beat. This week, we investigated a recent drop in the Bitcoin hash rate, the battle for top North American miner, and good old-fashioned technical analysis.

“Neither of these transactions were actually the largest amount of Bitcoin to ever be moved. That honor goes to a 550,000 BTC transaction made on November 16, 2011 by the Mt. Gox exchange. Worth $1.32 million at that time, that amount of Bitcoin could be liquidated for more than $7 billion today.”

“It is obvious that the psychology of trading significantly affects the performance of stock speculation both in the traditional market and in the field of cryptocurrency. It is important to remember that the success of a person in any field of activity depends on the emotional component, namely the internal balance. Exchange trading is a nervous activity, and if you do not learn to take emotions under control, the results can be disastrous. The basis for achieving success in stock trading, in my opinion, are two fundamental factors. The first factor relates to the field of formulation of the trading idea, and the second — to the area of its implementation.”

“Bitfarms, which provides computing power to cryptocurrency networks such as Bitcoin (BTC) and operates five computing centers in Canada, has signed a non-binding memorandum of understanding with a private energy producer, thanks to which the company will be provided with up to 200 MW of electricity capacity in an unnamed country in South America without any deposits or any purchase commitments – and the direct price of the electricity will average 2 US cents per kWh, said the press release.”

“The board also amended others terms and conditions with regards to decision number 11/R.M. for the year 2016. These amendments were made in consultation with DMCC, and Dubai Airport free zone as well as institutions in the manufacturing sector. H.E. Abdullah Bin Tawk, Minister of Economy stated, ‘the approval is a roadmap to the launch of Dubai 10X initiative for a free zone company stock market which will bring in increased foreign investments, allowing companies in free zone areas to grow their business and attract investments improving the economic growth. It will also increase competition.’  ”

In our most recent article on the Secure Digital Markets blog, we did some Polkadot price analysis, where we analyze this sharded multichain and see how recent developments have served it. There are lots of themes and ideas to pick out here!

The price of Bitcoin has continued increasing since Monday when it was sitting at around $12,780 on its lowest level and reached $13,881 today at its highest point which was an increase of 8.62%. Since today’s high we have seen a decrease of 7.13% with the price coming down almost to the levels of the Monday’s low around which it is currently being traded, slightly above $13,000.

On the hourly chart, we can see that today’s high was an interaction with the horizontal level that marked last year’s highest point made on June 26th. As the interaction ended as a rejection a downfall was seen with the price being in a steep downward trajectory. This was most likely the completion of the 5th wave from the Minuette count or at least the 5th wave from the lower degree count.

If this is true, now we are going to see a corrective move developing which will push the price of Bitcoin below the $13,000 mark and potentially for a retest of some of the broken resistance levels for support. The most significant one would be at around $12,000 which was the vicinity of the prior high, but if the price has ended its higher degree count a longer-term correction could take place, especially considering that we have seen a parabolic run-up.

However, the bullish period is far from over and the upside potential is still present. But before higher highs can be made establishment of support is needed which would most likely be this expected downturn.

A rivalry of sorts is playing out in the North American Bitcoin mining world right now. Marathon Patent Group (which we reported on last week) is vying for the position of largest Bitcoin miner in North America right now, and they’re on track to take 1st place by Q3 2021.

Last week we reported on their novel deal with Beowolf Energy in Montana, and now that we are aware of their greater plan, it makes a lot of sense.

Riot Blockchain is the current incumbent and is working hard to maintain their lead, but based on current projections, it’s looking like Marathon Patent Group will overtake Riot by April of next year.

Marathon’s CEO highlighted that their growing operations are encouraged by “the backdrop of recently increasing bitcoin prices.” This makes another point clear: Bitcoin prices going up will bring old miners back online and increase the competitiveness in the space.

Well something just changed. Looking at the 180-day chart below, we can see the total hash rate dropping by almost 10% in just the last few days. What caused this? 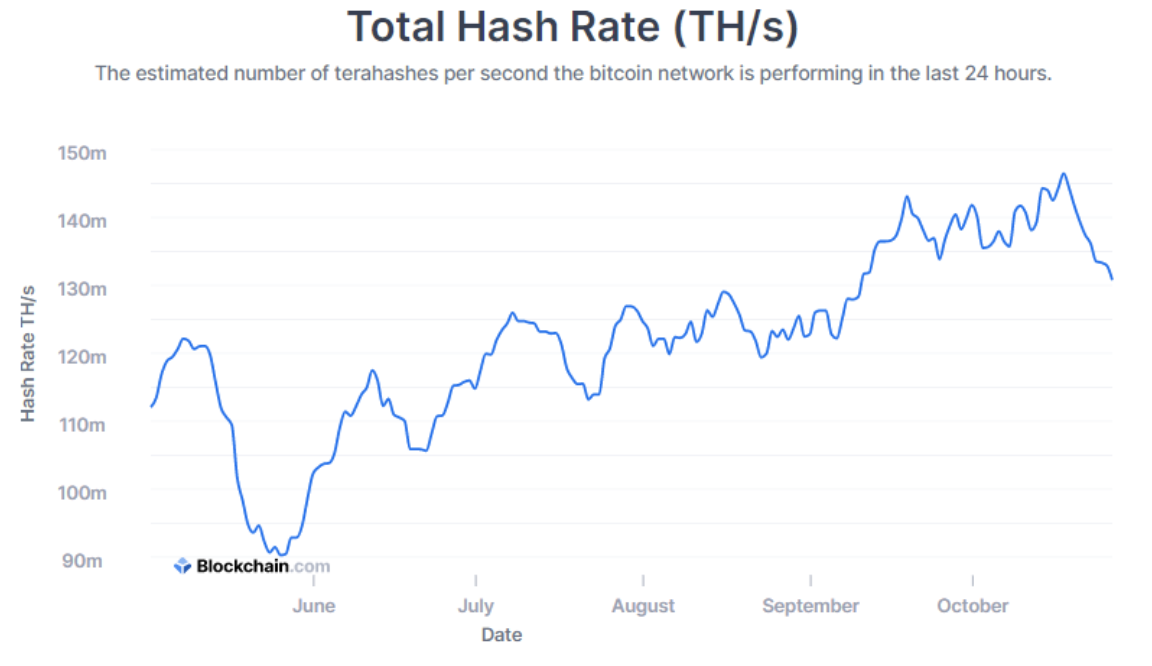 Well, as you know, the mining industry is extremely connected to the power industry. And in China, a lot of miners just switched from hydroelectric power to fossil fuels. This is more expensive and usually takes a good chunk of miners offline.

It is no longer profitable for these miners to continue running, even at the higher price of Bitcoin. This is a common seasonal occurrence as the rainy season ends and reflects the instability of power in China. Major China-based bitcoin mining pools, including PoolIn, F2Pool, BTC.com, and AntPool all dropped their computing power at around the same time.

It’s quite amazing that you can be halfway around the world from China and be affected by their rainy season, but that’s what’s going on with the hash rate.

Last week, we spent some time talking about the shortcomings of the Paypal announcement. Some people didn’t like that, but we wanted to share both sides of the coin, rather than being permabulls (which can get boring).

Bitcoin is approaching levels that we haven’t touched in years, and people are getting excited. The story seems good. MicroStrategy. Then Square. Now Paypal. It’s all looking good.

The $13k level has everyone excited, and now we just need to watch the on-chain metrics to see what’s actually happening.

And more money entering the system is the biggest metric to follow. We saw an unprecedented number of retail investors enter Bitcoin earlier this year with their first stimulus check (there were an uncanny number of first-time deposits for $1,200, Coinbase reported). So what will happen if there’s another stimulus package? And what will happen in the various election outcomes that could occur?

We’ve discussed it before, but we’re really trying to think about all the different events and where they can lead. Now Coinbase has announced their CoinbaseCard , which will allow customers to spend crypto in stores. There have been options like this available before, but never by a servicer provider so large.

Although we have skewed towards Bitcoin as more of a store of value than a medium of transfer recently, this could be another set of big news to watch out for.

Liquidity and trading may not always be the most interesting, but when you can see how the big cash inflow and outflows affect prices, it starts to get fun.

On another note, our research team is back with some new research. On Monday, we’re going to be releasing an industry report on blockchain’s military applications, and we think you’ll find it interesting. If this is something that appeals to you, you can subscribe here to receive it.

PrevPreviousPayPal is the Next Brick in the Wall: Broker’s Beat Volume #15
NextThings Are Heating Up: Broker’s Beat Volume #17Next
We use cookies on our website to give you the most relevant experience by remembering your preferences and repeat visits. By clicking “Accept All”, you consent to the use of ALL the cookies. However, you may visit "Cookie Settings" to provide a controlled consent.
Cookie SettingsAccept All
Manage consent