What’s Next After an ATH: Broker’s Beat Volume #20

Welcome to the 20th issue of the Broker’s Beat. First off, BTC hit an all-time high (ATH)! Now, we investigate the technicals after an all-time high, as well as how the hash rate is reflecting this new dynamic.

“The stock of one of China’s “Big Three” mining firms is in free fall Monday after reporting another quarterly loss, underscoring the operating challenges imposed by COVID-19. Canaan Creative, which manufactures mining rigs, released its third-quarter financial results Monday. The company posted a net loss of $12.7 million, or 54 cents per share, on revenues of $24 million. Although quarterly revenues grew 5%, the company’s net losses more than quadrupled.”

“Bitcoin brought to the table the disruptive idea of ​​consensus, which supported by its Proof of Work (PoW) algorithm, has made it possible to trust everyone and not trust anyone at the same time. The future of this highly appreciated technology also depends on the maturation and decentralization of this nascent industry. In fact, the most important risk that Bitcoin has faced since its creation is the possibility that some entity can take over more than half of the mining power (hashrate) of the network.”

Another Blow To Bitcoin Miners Comes This Sunday

“Bitcoin (BTC) mining difficulty is expected to rise again in two days, the most since September, cutting into the profit margins of BTC miners right after a strong market correction this week. This level is still relatively far from the all-time high of 20 T reached in mid-October. That said, the change itself would be the largest percentage since mid-September. This is also the second adjustment after the difficulty’s second largest drop in history on November 3.”

“Bitcoin mining in North America got a shot in the arm recently caused by a dramatic drop in difficulty rate as the rainy season in China’s Sichuan province ended and miners went offline. A recent report based on BTC.com data noted that this drop in mining difficulty includes the largest percentage drop (at 16 percent) since the first miners with ASICs were brought online in 2012.”

In our most recent article on the Secure Digital Markets blog, we analyzed the behemoth digital asset that is Bitcoin to see how recent developments (like the all-time high) have served it.

Since the start of the week, the price of Bitcoin has decreased at first from its peak of $19,849 made on Monday to $18134 on Tuesday which was a decrease of 8.62%. From there the price started increasing again and has made its past the lower horizontal resistance level which represents the daily candle close of the December 2017 all-time high, coming to $19,458 today. Currently, it is being traded slightly lower but is still in an upward trajectory.

On the hourly chart, we can see that the price moved slowly to the upside from Tuesday’s low compared to the previously seen rise which was made straight up. The decline seen from the new all-time high until Tuesday was most likely the corrective 4th wave out of the impulsive five-wave move that started on the 26th of November when the price fell to the$16,500 area.

If this is true then the slow ascending move we have seen from Tuesday is the developing 5th wave that is to exceed the prior high, but considering the slow momentum it could very well end as a truncation around the same levels.

If this is the end of the 5th wave from both the Minuette and the Minute count that would mean that the price increase of the Bitcoin could come to a halt for the time being. Considering the significance behind the levels it is currently visiting the struggle between the buyers and the sellers is to take place before the sellers take control of the market for the expected corrective downturn.

We could see a quick spike inside the territory of the upper range which would trigger sell orders and potentially push trading bots to start chasing the price to the downside which would result in an increased selling.

Every time we go to write about a specific mining pool or discuss a more nuanced point of the mining market, something big happens with China.

2 weeks ago, we talked about the growing concern in the mainstream over China’s dominance in the Bitcoin mining space. Now we’re seeing the potential for China to invade Taiwan or show other aggression that would cause further issues down the line.

The US could turn Bitcoin (and Bitcoin mining) into a proxy issue for this international conflict. As China is perceived to have a large part of the control over Bitcoin right now – at least from an outsider’s perspective – this is an easy target for a country whose relationship with China is becoming increasingly complex.

Further, some Chinese news sources are saying that the Yunnan province is banning the supply of power to Bitcoin miners. This is the 4th largest Bitcoin mining province, so it isn’t a big deal in itself, but if this is the first of several changes in policy within China, we would be worried about what that means for network health.

Today’s issue is based on “what ifs” rather than “what is” because we are in a state of flux and don’t know what to think of this. Bitcoin, originally meant to be a currency without borders, is in the middle of a proxy war that could get increasingly unpredictable going forward.

This is actually a good thing for miners outside of China, but could spell short-term trouble for the price of Bitcoin.

The total estimated number of terahashes per second has been on the rise, coming from its lowest point at 106.6M on November 3rd to 141M on the 23rd at its highest peak. Since then a pullback was made following the price decrease and ended the month on 128.31M. 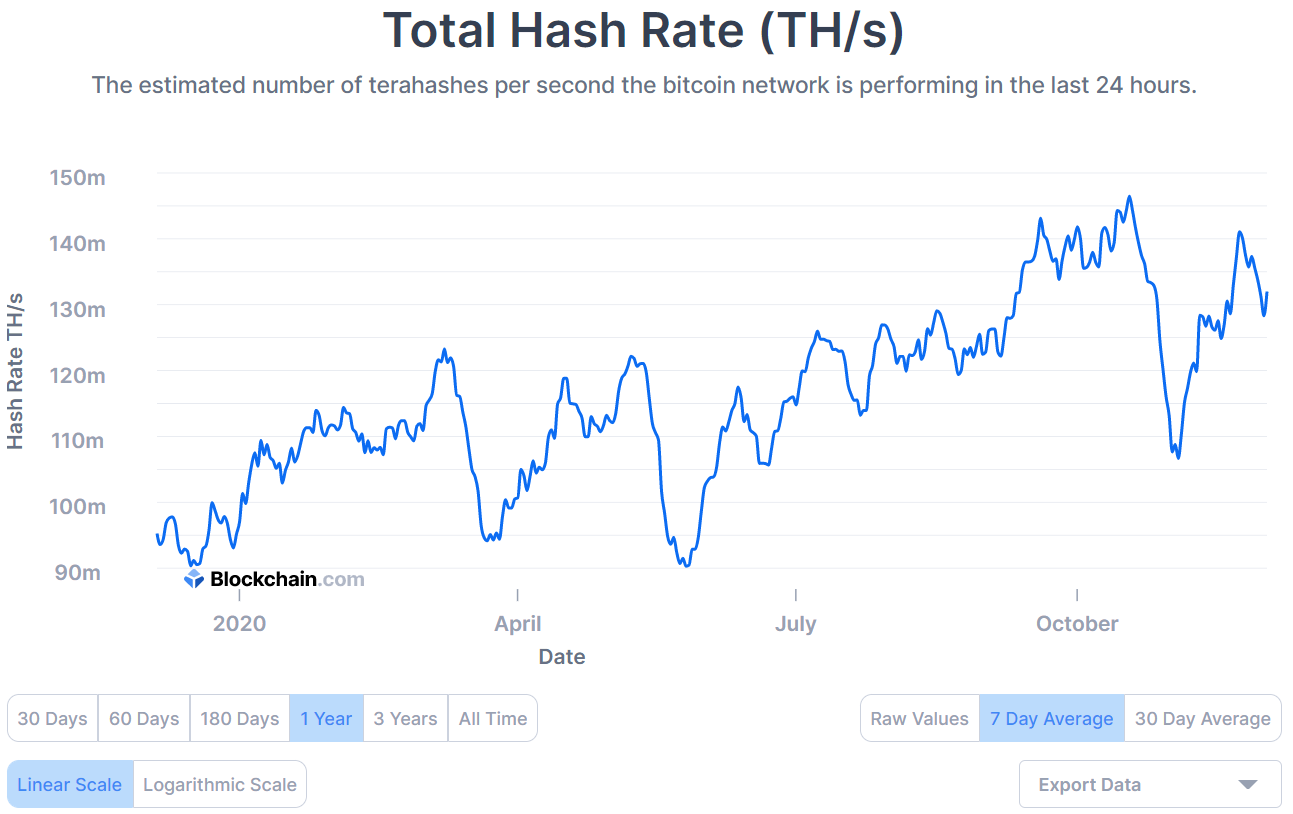 This valuation came slightly below its all-time high made last month but a sharp decline was made after which could be an early indication that it has reached its short-term capacity for a while. With the Chinese miners moving last month due to the rainy season in Sichuan province it would appear that they have turned back in November.

We could potentially see further decline in the hashrate in the following month especially if the price of Bitcoin starts decreasing from here. 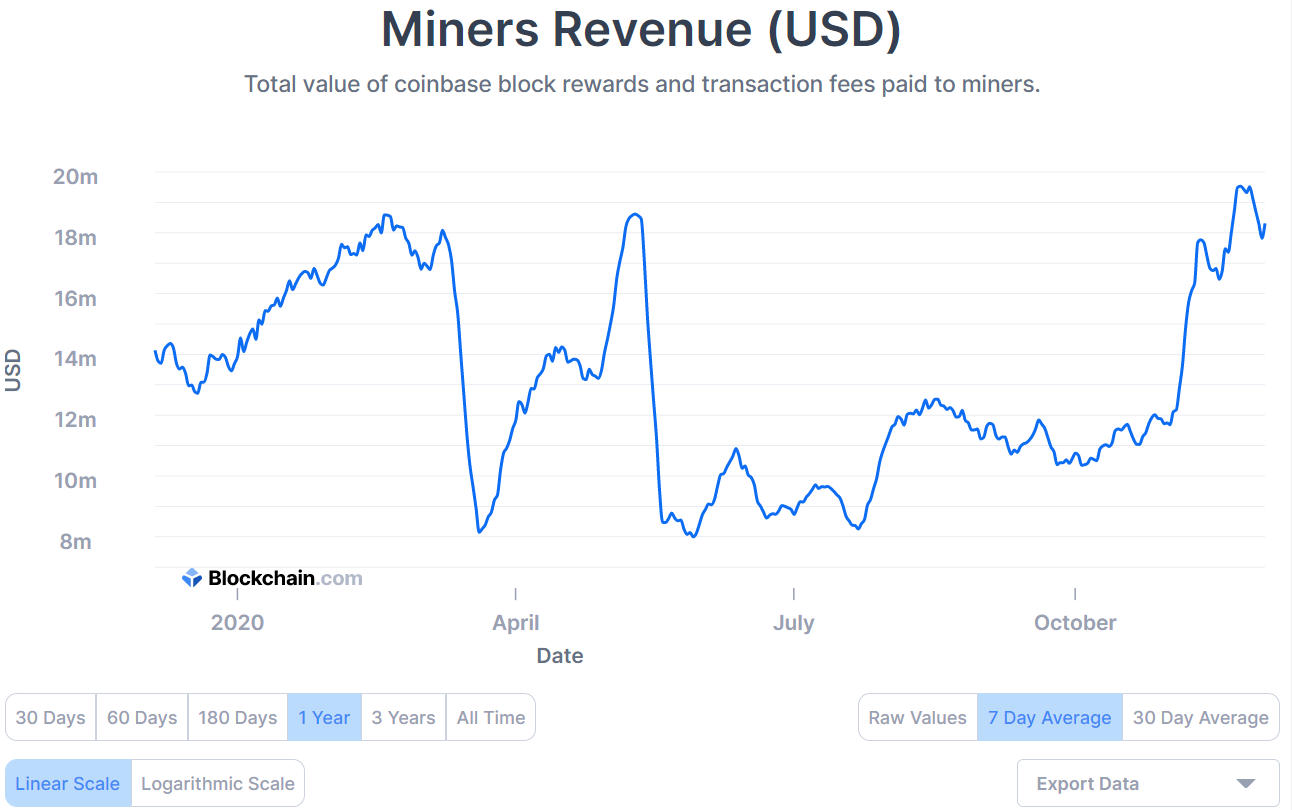 Miners revenue has been in a decline from last Friday when it came up to 19.515M which was its highest point of the year. It fell down to 17.816M on the Tuesday but started increasing again and is now in a slight upward trajectory.

If the price of Bitcoin starts decreasing after a rejection at the all-time high we could expected to see a downturn in miners revenue as well in the upcoming period.

Some big things happened in the last two weeks.

First, we got an all-time high in Bitcoin, albeit briefly. This is sure to result in more money pouring into the crypto space, and mainstream exposure at the same time.

On a more granular level, we had a massive pump of XRP in the last week of November, and the launch of Ethereum 2.0. Both of these brought a ton of attention to the space and resulted in more liquidity.

XRP holders were taking advantage of the pump to unload some of their tokens, and Ethereum’s big change will likely bring about spikes in volume as staking and other mechanisms start to find their own equilibrium. Basically, recent events are a catalyst for change.

Chainanalysis shows that the inflows of ETH to exchanges massively spiked at the end of last week and continues to show spikes now. All of these speak to higher volatility and fluctuating amounts of supply, that will likely lead to a drastic swing in one direction. We’re unsure of how correlated this will be with Bitcoin’s price swings, as this could be the time for these to become untethered.

The inflows for Bitcoin seem to have stabilized, which leads us to believe that the available volume has remained the same. This is a good sign for the stability of Bitcoin, and a sign that wasn’t around the last time it touched an all-time high.

On a more philosophical level, as Bitcoin faces the prospect of new highs, we’ll see media and investor attention like never before. What happens next will likely define the next 2 years of the crypto space, as this is the perfect opportunity for more institutional investors to join in on the fun.

PrevPreviousOn the Way to an ATH: Broker’s Beat Volume #19
NextMinor Correction, but What’s Next? Broker’s Beat Volume #21Next
We use cookies on our website to give you the most relevant experience by remembering your preferences and repeat visits. By clicking “Accept All”, you consent to the use of ALL the cookies. However, you may visit "Cookie Settings" to provide a controlled consent.
Cookie SettingsAccept All
Manage consent